I have travelled on the railways of East Anglia many times over the years. In the early 1970s, British Rail Eastern Region marketed the East Anglian Ranger Ticket. This gave seven days unlimited travel throughout Norfolk and Suffolk although on weekdays it wasn’t valid until after 8:45am. In 1971, as the leaflet indicates, it cost just 75 pence for children. The following year during the school Summer holidays I decided to take advantage of one of these tickets. The only slight issue was that I lived in Stevenage and the nearest station covered by the Anglian Ranger was Cambridge. To get round this, I had to purchase a return ticket each day between these two stations. There was a train from Stevenage just before 8 o’clock that would arrive in Cambridge at 8:50am so just inside the valid off-peak timeframe. 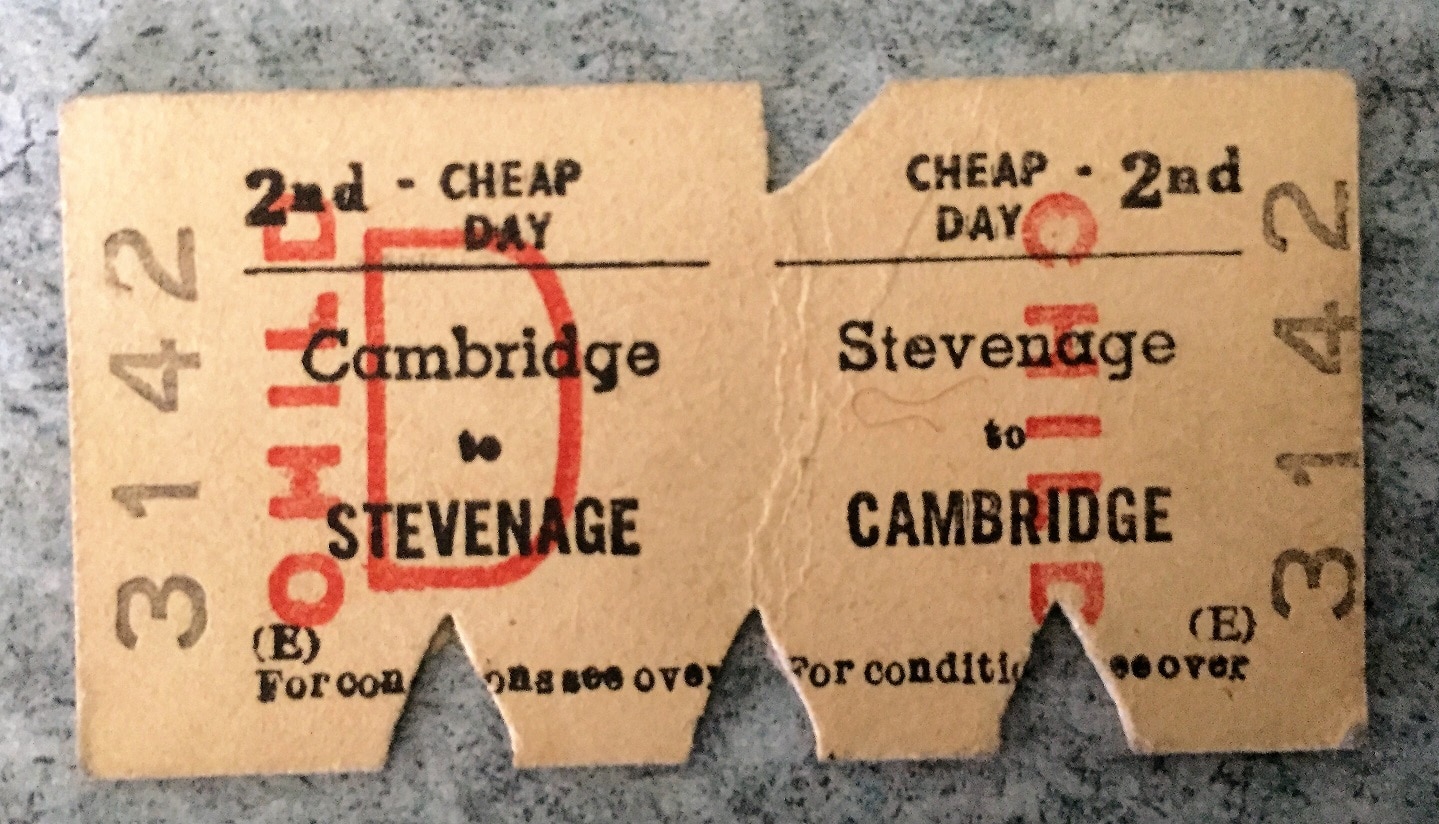 Fortunately there was always something to see at Cambridge. Over the years that there had been many firsts for me in terms of sighting different types of traction. One of my earliest memories was seeing one of the original Western Region named class 47‘s for the first time. D1677  Thor was allocated to 30A Stratford in the late 1960’s. and early 70’s before returning back to the Western Region. It is still in traffic although it was re-engined to become Class 57 57308 and is currently owned by Direct Rail Services.

Another of my firsts was not so fortunate. It was Metro Camel driving motor brake second E79067. This was in green livery when it was withdrawn in 1968-9 period. It had ‘Cond‘ splash painted on the side of it. I don’t know where it was broken up but after all these years, I still remember it as I hadn’t seen any of these light weight Metro Camel units, the forerunners  of the successful Class 101’s.

Another my first sightings in Cambridge during my visits were the two D. Wickham and Co. units, comprising of Driving Motor Brake Seconds (DMBS)  E50417 and 50418. Each motor car was were partnered with Driving Trailer Composites (DTCL) E56172 and 56173 respectively. These two twin sets were the last of the five produced by the company in Ware to remain in passenger service.  The second built, 50416 with 56171 trailer, was converted for departmental use by the by the Eastern Region General Manager. Fortunately this has survived and is operated at the Llangollen Railway. The four cars making up the first and last sets to be built were exported to Trinidad in 1961. Some years ago, one of the railway magazines had photos of at least a couple of these vehicles. They had been grounded and had been used as living accommodation although another of the cars had been used as ‘The Train Cafe’ in Maraval during the 1980’s.

It was usual for me to spend around an hour at Cambridge station following my arrival because there were no trains forward to connect into mine from Stevenage. There was always shunting taking place in the sidings opposite the long platform as well as through freights and express passenger trains to London Liverpool Street. It is funny but, at the time, I was so used to the sight of corporate blue grey livery of coaching stock, it was only when I saw a vehicle in the old maroon livery that I took more notice. I still prefer the maroon but the sighting of corporate BR blue/grey liveried vehicles in a heritage train does not detract from the historical nature of the train.

My East Anglian Ranger ticket that I used in 1972. At that time my paper round earnt me £1.37 and a half pence a week.

Many of my journeys during the validity of my Ranger ticket were on all over corporate BR blue liveried DMUs. At least they had the benefit of forward views from the passenger compartment through the driving cab windows. One of the first journeys I made on my Ranger Ticket was from from Cambridge to Ipswich. I had been there the previous year when I had visited the closed 32B Ipswich depot. The attraction was to see many of the withdrawn Class 15 Paxman Engined Type 1’s. 23 of the class had been withdrawn en-mass,  in March 1971  from 30A Stratford. They were stored at 32B  until late 1971 after which they were towed to Crewe Works and scrapped. Four of the class,withdrawn in 1969, were retained as electric train preheating units. Fortunately one of these D8233 has been preserved and is being restored at the East Lancs Railway. 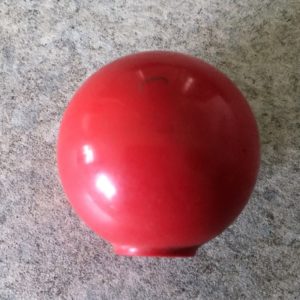 I had broken my wrist and it was in plaster when I visited the closed Ipswich shed the previous year. A member of staff kindly showed me round. It was quite eerie going into the shed and strolling along the raised walkways between the rows of withdrawn engines. There were pigeon droppings everywhere on the locos and on the walkways. It was, as they say, as silent as the grave. We looked in many of the cabs and the staff member, who must have taken pity on me with my arm in plaster, removed one of the control knobs from D8222 and gave it to me and I still have to this day.

Outside, one of the class 15’s D8211 had a plate attached to the side of the cab with the wording ‘The English Electric Company 1959′. None of the other class members had such a plate. This is of interest because the locos were designed by British Thompson Houston with their electrical equipment. BTH was a subsidiary of GEC at the time and was not linked to English Electric at all. D8211 was part of the second batch built from October 1959 to February 1961 at the Clayton Equipment Company near Derby. 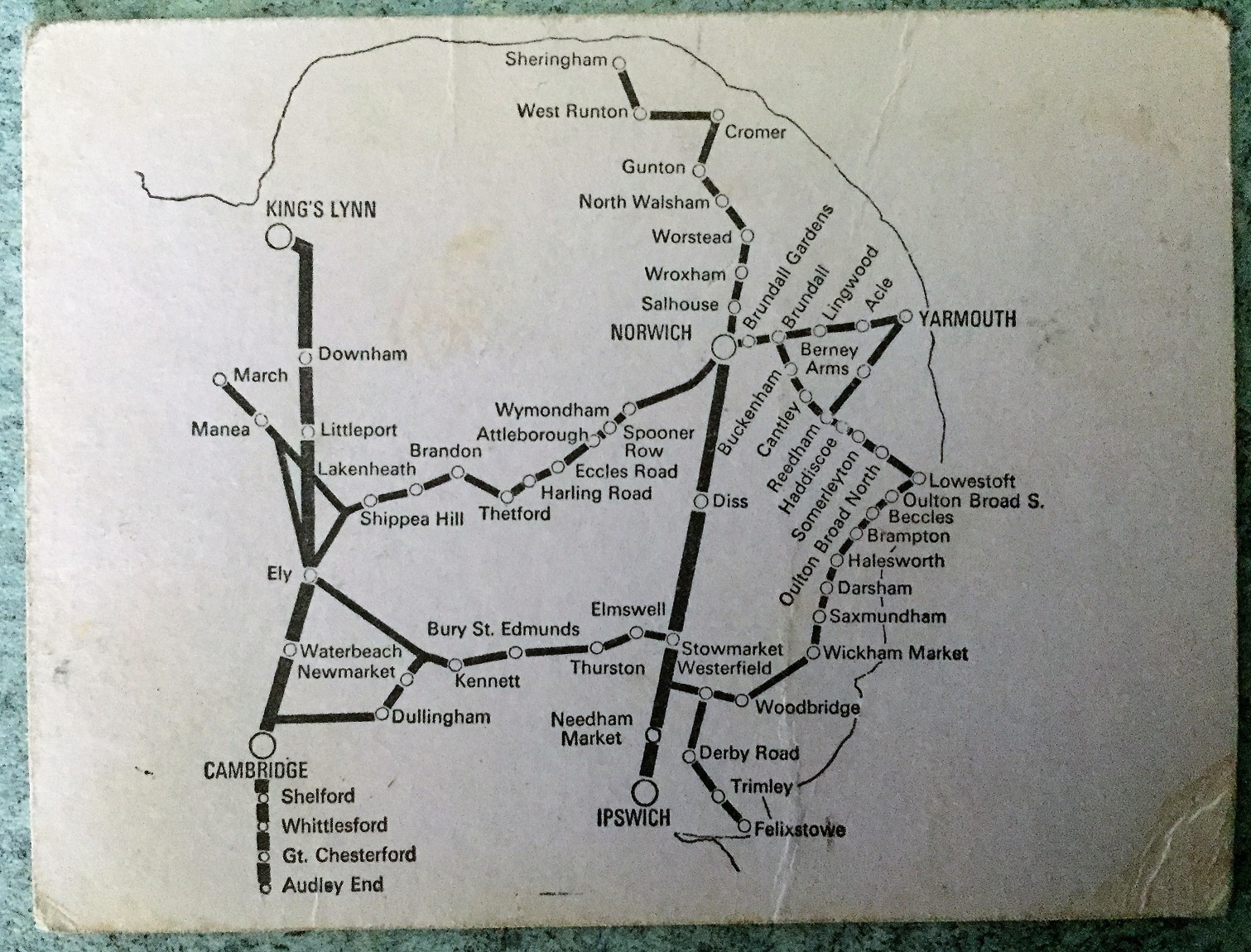 One memory I have of Lowestoft is the excellent fish and chips. During family holidays in Norfolk, I remember buying them in the evening and enjoying eating them on the beach. I had to repeat the experience so traveled from Norwich Thorpe. The journey took me through Haddiscoe and under the closed route from Yarmouth South Town and Haddiscoe High Level. I always thought as a child that the derelict Haddiscoe Signal Box perched on the embankment took on a ghostly form. Amazingly, the box has been fully restored as a private dwelling. The double tracked route used to carry London Express trains as well as local services but closed to passengers in 1959.

Much of my travel over the lines in East Anglia were in Class 105 Craven designed DMUs. They had been so prevalent on the Great Northern suburban services from Stevenage and so were viewed with some derision. Incredible to believe that there are only 3 cars remaining from a once numerous fleet of nearly 300 examples. The Llangollen Railway did operate a Cravens driving trailer composite (DTCL) with a Class 127 power car but after a number of years was taken out of service for extensive restoration. I understand there is a plan to operate it once it’s completed with a Class 104 DMU. The East Lancs Railway have the only twin set remaining. The DTCL has has reached an advanced state in its restoration and has been tested with a Class 121 power car, while its power car has at least had the engines started. The last Craven train twin set to remain in BR service was in 1988 so it will be quite nostalgic experience to travel on this unit when it is completed. Class 101 Metropolitan Camel DMUs which were also a common sight in East Anglia have fared rather better with many examples operating on heritage railways. My travel on one of these on the Mid-Norfolk Railway is featured in one of my other Blog posts.

One of the ‘must do’ branches in Norfolk is that to Sherringham. The ride through the attractive Norfolk countryside is a joy. As John Betjeman has said  ‘You really see much more country from a train than ever you do from a motor car’. Clearly at Sherringham there is also the golden nugget of the North Norfolk Railway which I covered another blog post. Other Stations in BR Eastern Region

Talk of John Betjeman reminds me of his journey to Norfolk in 1961 which was covered in a program called John Betjeman goes by train where he travelled between King’s Lynn and Hunstanton Unfortunately for me and many millions of others, British Rail closed the Hunstanton branch. I did travel from Ely to King’s Lynn on a number of occasions on my Ranger ticket in 1972 when the only intermediate stations were at Littleport and Downham Market. Since that time, Magdalan Road renamed Watlington was reopened in 1975 and now with the franchised railway of today, enjoys an hourly service. 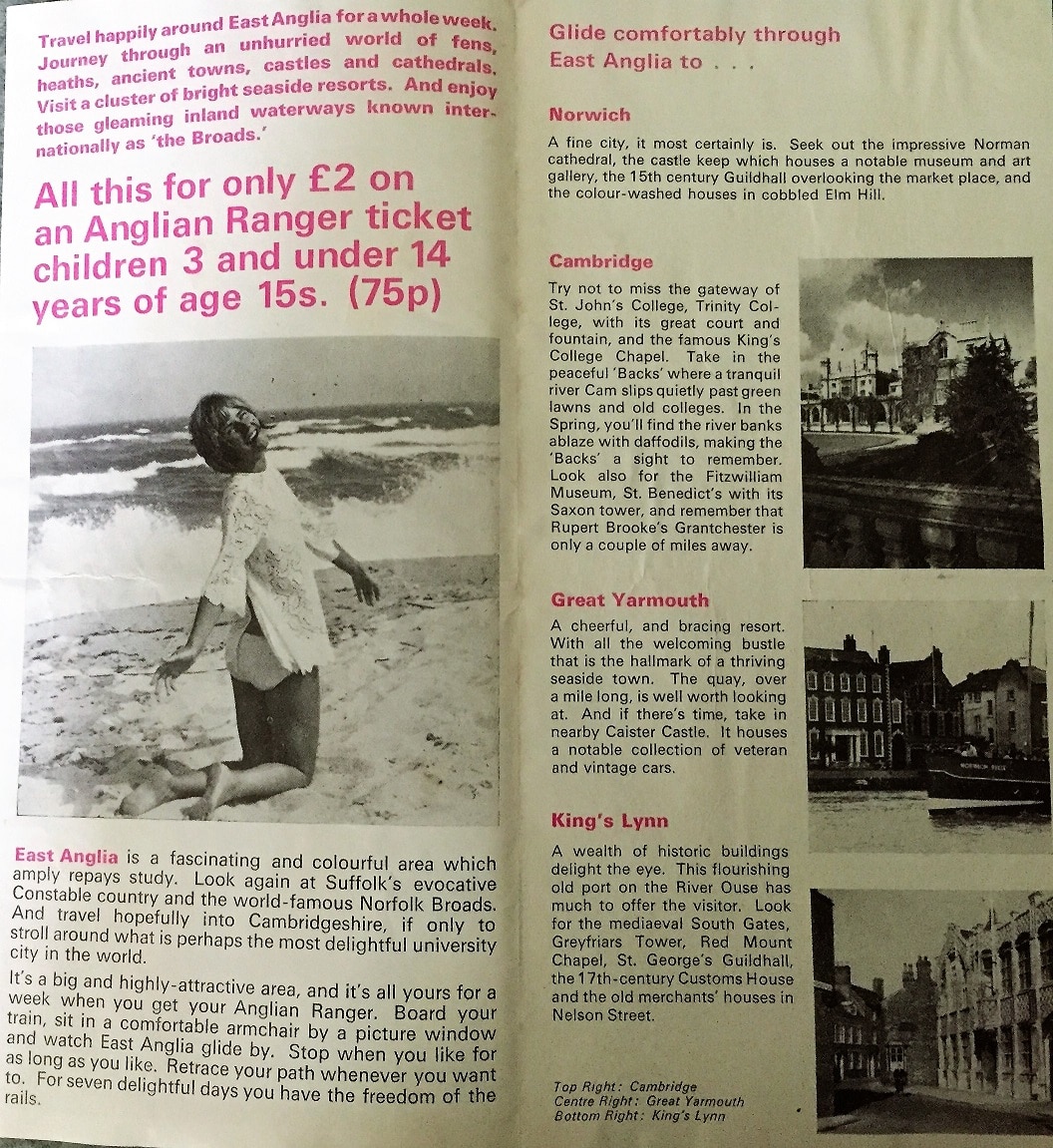 Although the trains I traveled on in the 1970’s were not air conditioned, had slam doors, with rattles and vibrations, there was something endearing about them and I have fond memories. These are rekindled each time I travel on Heritage DMU on one of our glorious preserved railways.