If you have seen my post introducing to my model railway, then you will know I have included a model of Bath Green Park locomotive shed. I am going to explain how I built this model railway shed.

Loco line-up outside the shed

The locomotive shed at Bath Green Park was located just outside the station. On the 6th March 1966, it was closed along with the entire route and demolished soon after closure. During its years of operation, it was allocated a variety of locomotive types from the London Midland and Scottish Railway and latterly the Southern Railway as well, together with BR Standards. It also played host to a number of long-distance visiting types including LNER B1’s. Modelling this particular locomotive shed would permit me to authentically display and operate an extensive range of locomotives.

What material to use for the model?

The Somerset and Dorset shed building was constructed of wood so I considered how this might be replicated in a model.

One day I was travelling on a Great Western Railway train with Richard Noyle, the Head of IT at Great Western Railway. We were having coffee and he was using a [easyazon_link identifier=”B005D75YY2″ locale=”UK” tag=”railway02-21″]wooden stirrer[/easyazon_link]. I realised that the width of the stick could be perfect to represent the wooden cladding on the side of my model of the Somerset and Dorset shed. Using photographs, particularly those of Ivo Peter’s, I made a scale drawing of the shed. It soon became clear that due to space constraints I would not be able to make a full-length building. However, there was sufficient space to accommodate the scale width of the building. Structure of the Somerset and Dorset Loco Shed

I began by constructing the roof trusses and the upright supports laying them out flat and glueing them together. Studying internal photographs of the construction gave me an indication of how to position the [easyazon_link identifier=”B005D75YY2″ locale=”UK” tag=”railway02-21″]wooden stirrer[/easyazon_link] sticks. It was then a case of joining the various sections together. Guage testing of the shed with a locomotive

After leaving for a couple of days to let the adhesive set, I then trial fitted a locomotive inside the framing. Next, I moved the structure to the baseboard where I had already laid the track albeit securing it temporarily with drawing pins. 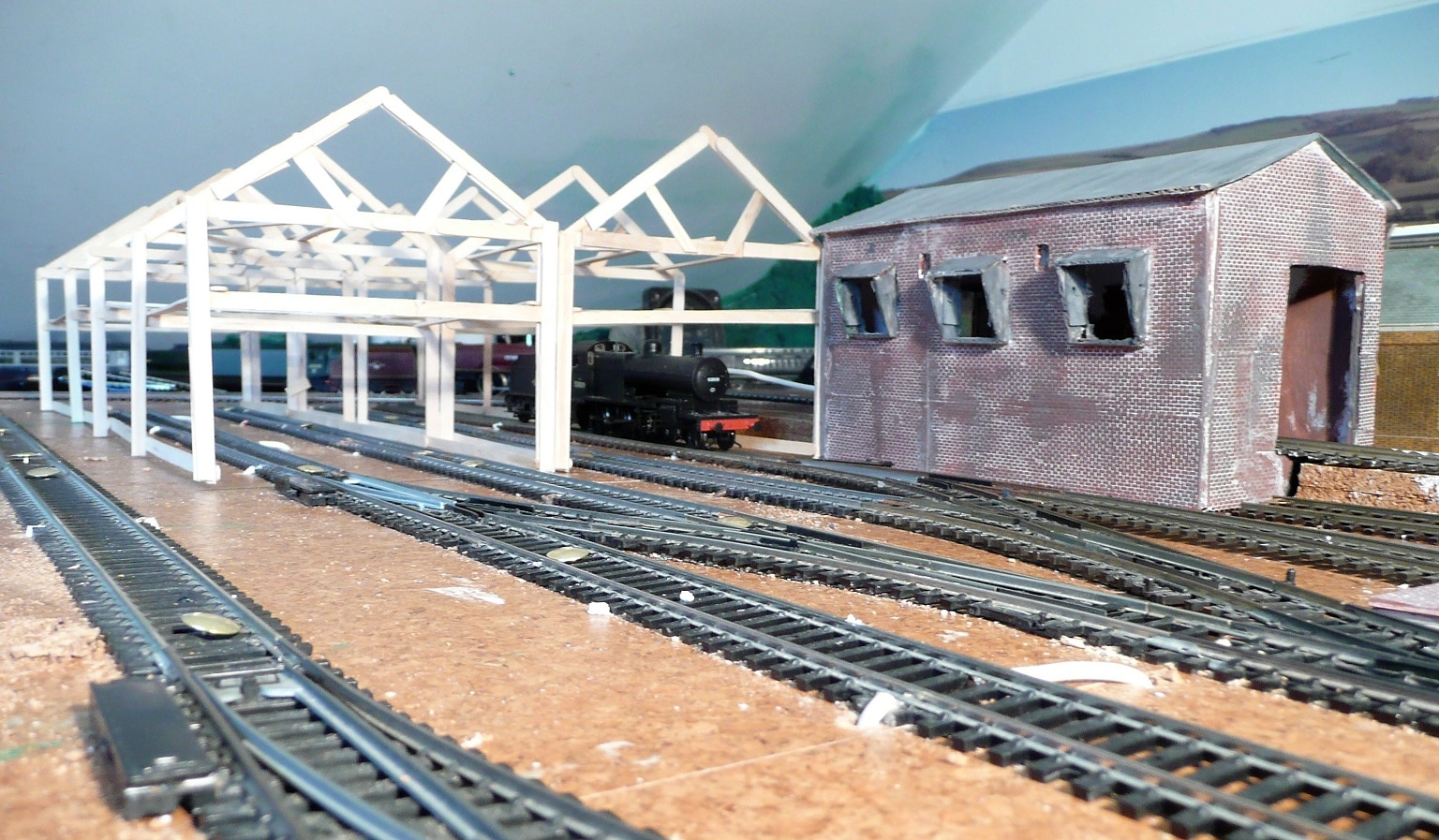 Positioning of the shed on site

I now had the task of effectively cladding the sides of the frame. Richard and several other of my colleagues at GWR had kindly collected lots of used stirrer sticks during their daily commutes, saving the stick each time they had a coffee. This is recycling indeed! Who would have thought that a humble wooden stirrer stick would be vital when constructing a model of an iconic steam locomotive shed? How I made the roof

For the roof I used cardboard but I also had to make a centre vented section. This is not an exact representation but looks OK to me. With the structure complete, it was time for painting. I used my own judgment on the actual shade of paint. Although I consulted numerous colour images in books and online, different lighting conditions at the time the photos were taken over fifty years ago meant there were a variety of shades to choose from. I have tried to weather up the finished results. 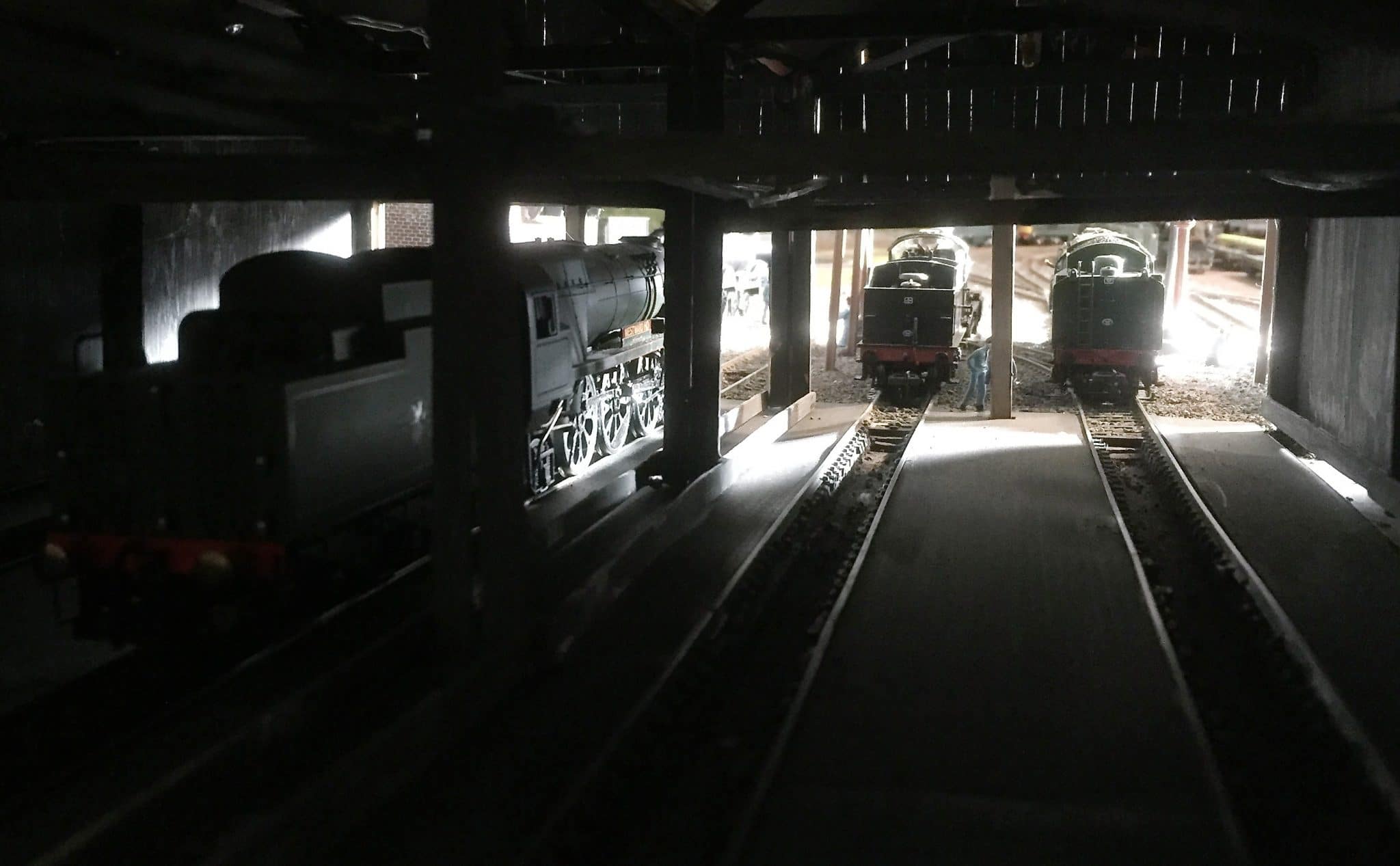 View from the shed looking out

The shed building roads have all been given inspection pits. You will also notice in the photographs a model of the coaling stage. This was built at the shed in the early 1950s to replace a wooden structure. I suitably weathered this building to add a bit more realism. My model version constructed using strong cardboard. Ariel view of the shed site

The aerial shot of the shed layout shows another building. This is the Midland Railway shed which in reality was slightly further back relative to the Somerset and Dorset building than in my model. Again, space constraints made this necessary. This shed was built of stone so I used cladding sheets (similar to this) over the original brick paper of an old cardboard model. I bought this model from my Godson James Russ, along with some his other model railway items to help fund him through University a few years ago. 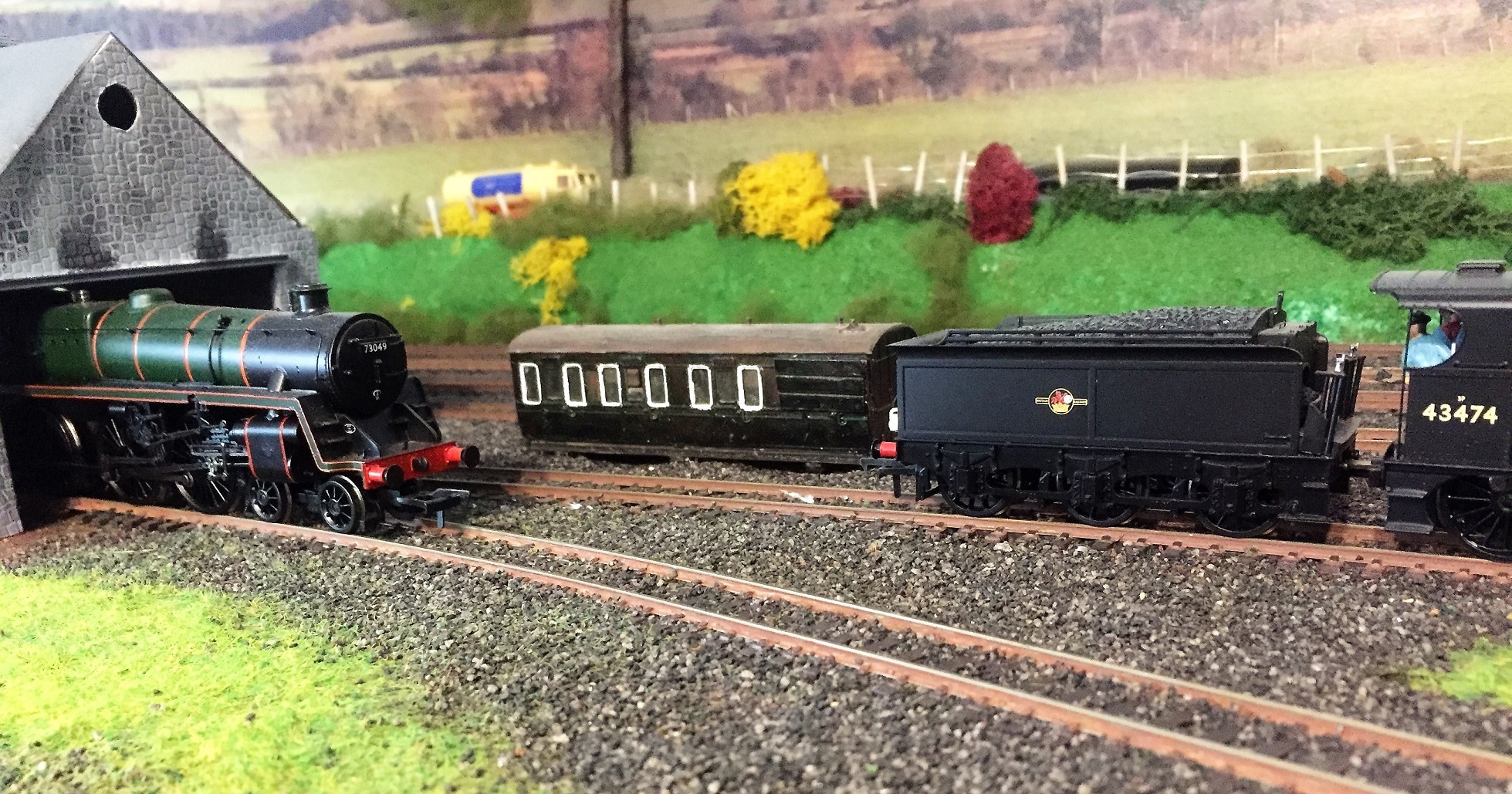 I also built the boiler house and offices on the back of the shed. To complete the scene, I positioned a grounded wooden coach body to depict the one at the shed that was used for locomotive crew mutual improvement classes.

9F on the turntable

Those of you familiar with the layout at Bath Green Park locomotive depot, will note also that the turntable is not positioned just outside the Midland shed. Another spacing issue. So I have placed it in the approximate area where it would have been in the 1920s. However, the track layout is similar to that in the shed’s later years. 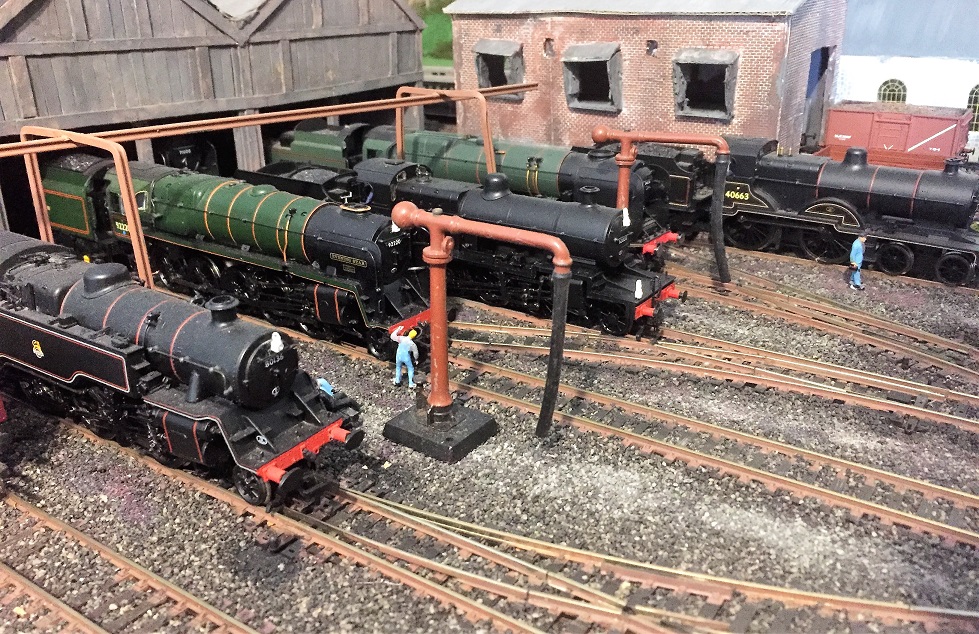 Locos awaiting next turn of duty

It is very satisfying to have recreated a lost railway scene in model form. The shed coded 71G under Southern Region control and later 82G under the Western Regional authorities may be no more on the national railways of today but its recreation in 00 gauge can at least be experienced in the comfort of my home. I hope you enjoy seeing the photographs that I have taken of my creation and if you want to add a loco shed to your layout but don’t want to build it yourself then I recommend this model from Hornby.