Following my first 12 months with British Rail Engineering Ltd at Crewe Works in the training school I embarked on a further 2 years in the main Works from August 1975. If my memory serves me right, the Works employed around 5,000 people at that time. I would like to share some of my Crewe Works memories with you. One example of the many fine Locomotives built at Crewe Works outside the front of the Erecting Shop. British Railways Class 7 – 70000 Britannia just prior to being repainted in the Works some years ago.

The works were still building locomotives. At the time, the first of the High Speed Train power cars were being built in the Erecting Shop or 10 shop as it referred to. The Welding and Plate Shop was my first workshop assignment. It was adjacent to the Fabrication Shop and was under the control of the Superintendent, Dennis Dooley. Mr Dooley was renowned for being a strict disciplinarian. Apprentices had to wear green overalls and were very visible amongst the general workforce. If Mr Dooley spotted a ‘green overall’ that he didn’t recognise, he would challenge you and ask what your business was in his workshop! He would administer a severe verbal ‘ticking-off’ warning you to stay out in future unless you had authority to be there.

An impact on my railway career

In the Welding and Plate Shop, I was assigned to Frank Jones. One of the jobs I remember Frank doing was welding up damaged sections of traction motor carcasses. These castings were very heavy and had to be lowered onto the workbench using an overhead crane. One day I was assisting Frank manoeuver a carcass into position when the crane driver inadvertently lowered the carcass too quickly trapping one of Frank’s hands underneath. I immediately signaled to the crane driver to raise the carcass up. With his hand released, I clearly remember Frank calmly saying ‘Stupid Bugger!’ as he removed his welding gauntlet. His fingers were badly crushed and there was a significant amount of blood. I accompanied him to the medical centre.

Frank had worked at Crewe Works since before World War II. He told me that his chargehand and him were the last two people left who had worked on Tank Assembly at the Works during the war in the very workshop we were in. At that time, workshop conditions were thoroughly unpleasant. The atmosphere was full of welding fumes which were trapped in the building by the blackout precautions. His chargehand was three weeks younger than Frank and both were just a couple of months away from retirement aged 65 in the Winter of 1975/6. He was looking forward to this period of his life and wanted to enjoy his passion for fishing. Due to his injury, Frank was off work and I was transferred to another area of the workshop. I didn’t work with Frank again and indeed I never saw him again.

Some weeks later I was walking through Crewe town centre when I bumped into his chargehand. I asked after Frank specifically if he had made any prize fishing catches. His chargehand said that very sadly Frank had died just three weeks after retirement. I was stunned. This lovely man had worked all his life and had no time to enjoy his retirement. Although only 17 at the time, I made the decision that there was no way I would work full-time until I was 65. My father taught me I should save and that I should live within my means. Over the years since Frank’s death, I have made provision for early retirement. This lovely man unwittingly had a major impact on my career decision. 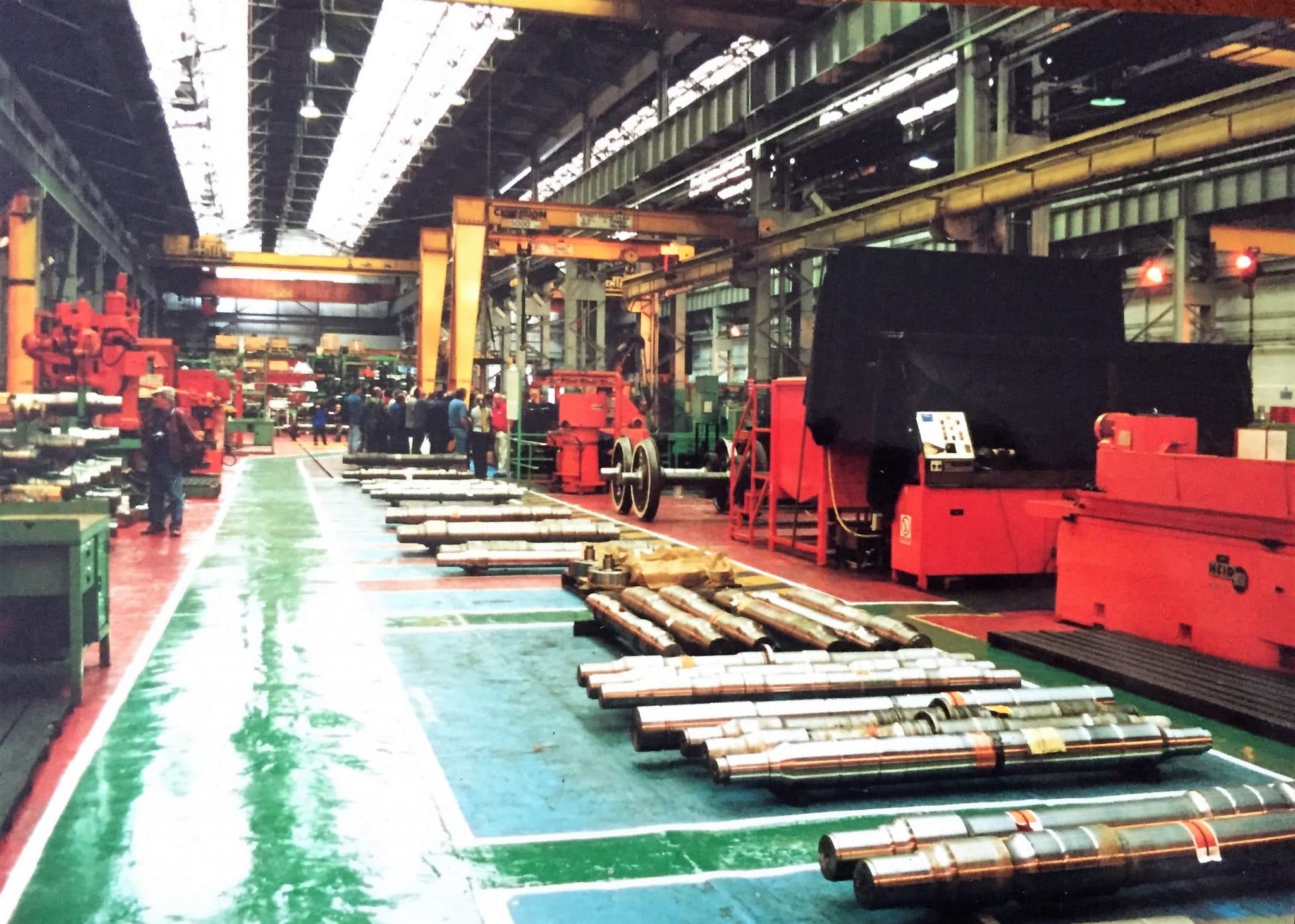 A typical workshop scene at Crewe Works taken a few years ago during one of the open days. Can you identify the workshop?

My next move was into the Fabrication Shop. Here I was accompanied by Training School friends. This included Steve Dodd also known as ‘Doddy’. Doddy in my view was one cool dude because he played in a rock band. A fellow member was Mike Atchison who had been at college with me. Mike was training to be an electrical engineer as well but within the Signal and Telegraph Department of British Rail at Gresty Road near Crewe station.

One day at college, Mike produced a portable cassette machine and said to me ‘Listen to this’ recording. The room was then full of the sound of rock music and it sounded incredible! As the music died away I said ‘Who was that?’ Mike said ‘It’s us’. I said I’d never heard of a group called ‘Us’. Mike laughed and said ‘No it’s us – me, Doddy and the lads’. I was very impressed! Mike recently made contact with me again after nearly 30 years. I remember on one occasion on the Fab. Shop Doddy being perched on the top of a large fuel tank from a Class 47, welding in new sections to replace rotted areas. Doddy was one of a number of my friends in the Works who nicknamed me ‘Cockney Rebel’ because I was a Southerner and it didn’t matter I was from Hertfordshire not London. 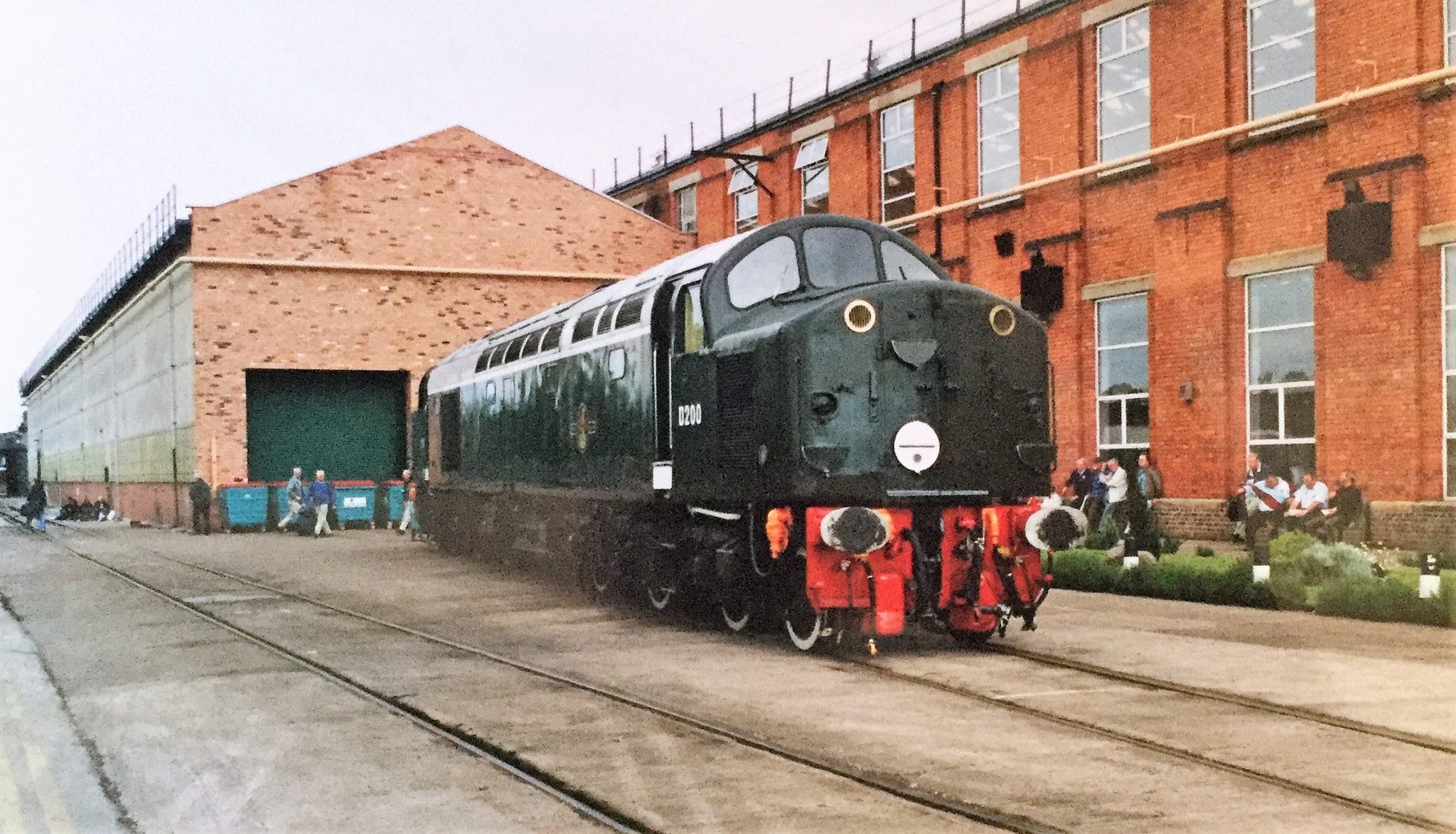 There was new build taking place within the fabrication shop with the webbing for the sides of the new High Speed Train power cars being held in jigs so they could be welded. To improve their welding skills apprentices spent time in the Welding School. This was located at the far end of the works opposite the General Stores, formerly the paint shop during the days of steam. Our tutor there was Roy.

One of the exercises was to weld two test pieces of steel plate, the edge of which had been prepared with a forty-five degree chamfer. The aim was to achieve a homogenous weld. The way to see how successful this had been was to take the welded plates and secure them in a vice with the weld level with the top of the jaws. The next bit was great therapy to release any anger or pent-up emotion. You picked up a large sledgehammer, aimed carefully and swung, clouting the top plate and splitting the weld clean down the middle. Roy would inspect the weld to see whether there were any blow holes or slag inclusions. Over a two-week period Roy taught myself and others to electric arc weld, braise and gas weld – a skill I’ve used many times since in my life. Although I’m a bit rusty now!

I would dearly love to know if anybody reading this knows Roy surname and can post it in the comments below please.

All too soon my period in the Fabrication Shop was up and I moved to the Traction Shop. Superintendent Towers was in charge and he had a reputation of being very strict too. This workshop used to be an erecting shop and was where the Class 52 Western diesel hydraulic locomotives were constructed in the 1960s. Change of use to the overhaul of electrical machines resulted in the pits between the railway lines in the  Workshop being filled in. A rumor that has prevailed for many years was that name and number plates from steam locomotive scrapped in the works we used as hard core in the pits before being covered by cement.

During my time in the Traction Shop I was put with a guy who overhauled tap changes on the 25kv transformers from Class 86 and 87 electric locomotives. This was the first time I encountered a feeling of resistance against imparting information. The guy I was to work alongside said to me ‘You’re one of those Engineering Apprentices that don’t like to get their hands dirty’. As I was training to become a professional engineer I was expected to learn by watching and not to get directly involved. However, my view was that you can’t just learn by standing back and watching others. Plus I like to help people wherever I can. You have to get stuck in and get your hands dirty. I insisted that I wasn’t like some of my predecessors. I welcomed the chance to assist him and learn how to use the tools. His attitude changed completely and we got along famously ever after.

At ‘Brew Time’ I would sit with the guys and enjoy the banter even when it was directed at me as ‘one of them who don’t get their hands dirty‘.

One day I was approached by an electrician who had a football card game. There were squares on the card each containing the name of a football club. You selected the club, initialed the box and paid over 5p. When all the squares were sold, a covered up square at the top of the card covered by blue tape was revealed to show the winning club. The guy said to me did I want the last square? I protested that I only had 4½p so would have to decline his kind offer. ‘Don’t worry’, he said laughing, ‘You can pay it from the winnings’ so I handed over my 4½p. He walked off only to start swearing. Turning round he said. ‘You’ve only gone and bloody won’. He handed me the winnings where upon I gave him back ½p! 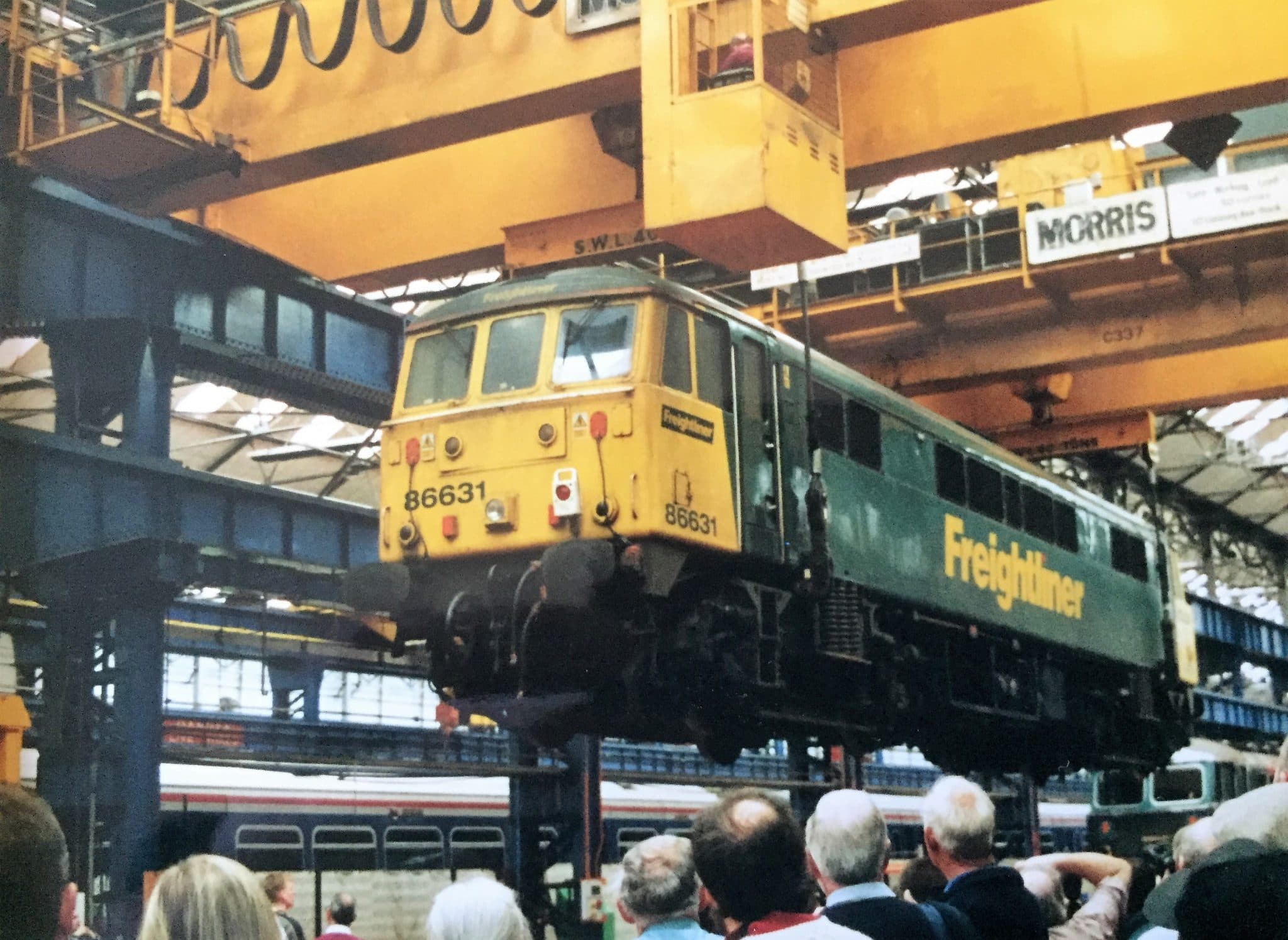 Around 80 tons of Locomotive being lifted by a pair of cranes in the Erecting Shop. The area of the workshop below the locomotive was full of HST 125 Power Cars being constructed during my time there in the mid-1970s.

The Traction Shop overhauled traction motors, generators and auxiliary electrical machines. Seeing these stripped down and helping with their reconstruction supplemented my college learning of how these machines operated.

The workshop always smelt of the varnish that was used to insulate armatures and coils from the machines. These parts once rewound and the electrical coils were then dipped in enclosed vats of insulation varnish that had been warmed. Air was evacuated and the resulting vacuum sucked the vanish into the windings ensuring they were fully insulated. Once dry, the components were re-installed into the machine carcasses and tested.

My Traction Shop training lasted about two months before I moved on to the Metallurgy Lab and Steel Foundry which I will cover this in Memories of Crewe Works (Part 2).

I am very proud to have served my time in Crewe Works and enjoy remembering the Works and the magnificent locomotives built there.

Memories of working on the P-Way
The Unique History of Railway Restaurant Carriages
'I Would Have Done The Job For Nothing' - Book Review
We need to restore railway branch lines
How to make your model railway look realistic
Crewe Works Apprentice Training School
How to go on holiday via the West Somerset Railway
More heritage railway to enjoy in the future
20 Easy Ways To Save Money on Train Travel
Starting Out At Crewe Works
Recovery Fund Boost for Churnet Valley Railway
Do you agree with my list of top ten steam locomotives?