I had been interested railways since I was frightened by an A4 Pacific as it stormed through the old Stevenage station from the North. I was a small child sitting in my pushchair on the Up platform. We were probably travelling to London to visit relatives. I also had an interest in engineering although, as a youngster, this simply came across as a desire to dismantle things and put them back together properly. Over the years friends and family have said that if I had a new car I would have to partially dismantle it and put it back together properly. Slim chance there as I wouldn’t buy a modern car. There is far too much to go wrong with them and they cost a fortune to fix! Inspired by my Father

When I was 16, my father gave me his old Honda 50 moped because he had bought a new one. We didn’t have a car in our family. One day the engine in my moped failed. I had been helping a friend’s brother rebuild a BSA 350cc motorbike so I felt confident enough to strip the engine down on my moped, find out the problem and rebuild it. Fortunately I found it was only a burnt out exhaust valve. I remember my father returned home from work and saw parts of the moped engine on all over the garage floor. In my defence, they were arranged neatly! He was amazed and pleased when a few days later I had reassembled the engine and got it working again. He said I should have a career in engineering.

My brother, Paul, already worked for British Aircraft Corporation in Stevenage in an engineering role. However, I wanted to combine my interest in engineering with that of railways. Father thought I should join the Royal Electrical and Mechanical Engineers, part of the Army, but I’m afraid having to take an order from someone who I had no respect for because of their manner towards me or their competence to do a job would test my tolerance level.

I had just completed my final exams at school and the teachers were understandably trying to get me to do A levels. Although I could study Physics and Maths I felt there must be something more that would lead me into a career in engineering although I have to say that engineering study has large elements of Physics and Maths. My Father discovered that British Rail Engineering Ltd took on apprentices at their main Works. Only two were taken on at each Works namely Crewe, Doncaster, Derby Locomotive, Derby Litchurch Lane and Swindon. This seemed an excellent way forward as it would combine both of my primary interests. The entry qualifications were 5 ‘O’ levels which had to be Maths, English, a Science subject and two other weighty subjects. I had studied Physics and Economics so I decided I would apply once my results came out in August.

In the meantime I started a local temporary job. I worked at Harper Engines in Stevenage. I was employed as an operator of two milling machines. Castings that were used as part of the hinges for the tip-up cabs on lorries had to be machined across the top by one milling machine and placed in the second machine for the sides to be faced off. Prior to this, I had had a paper round which paid a princely sum of £1.37½p per week. The wage for the machine operators job was a lot more especially when I worked on Saturday mornings as well. 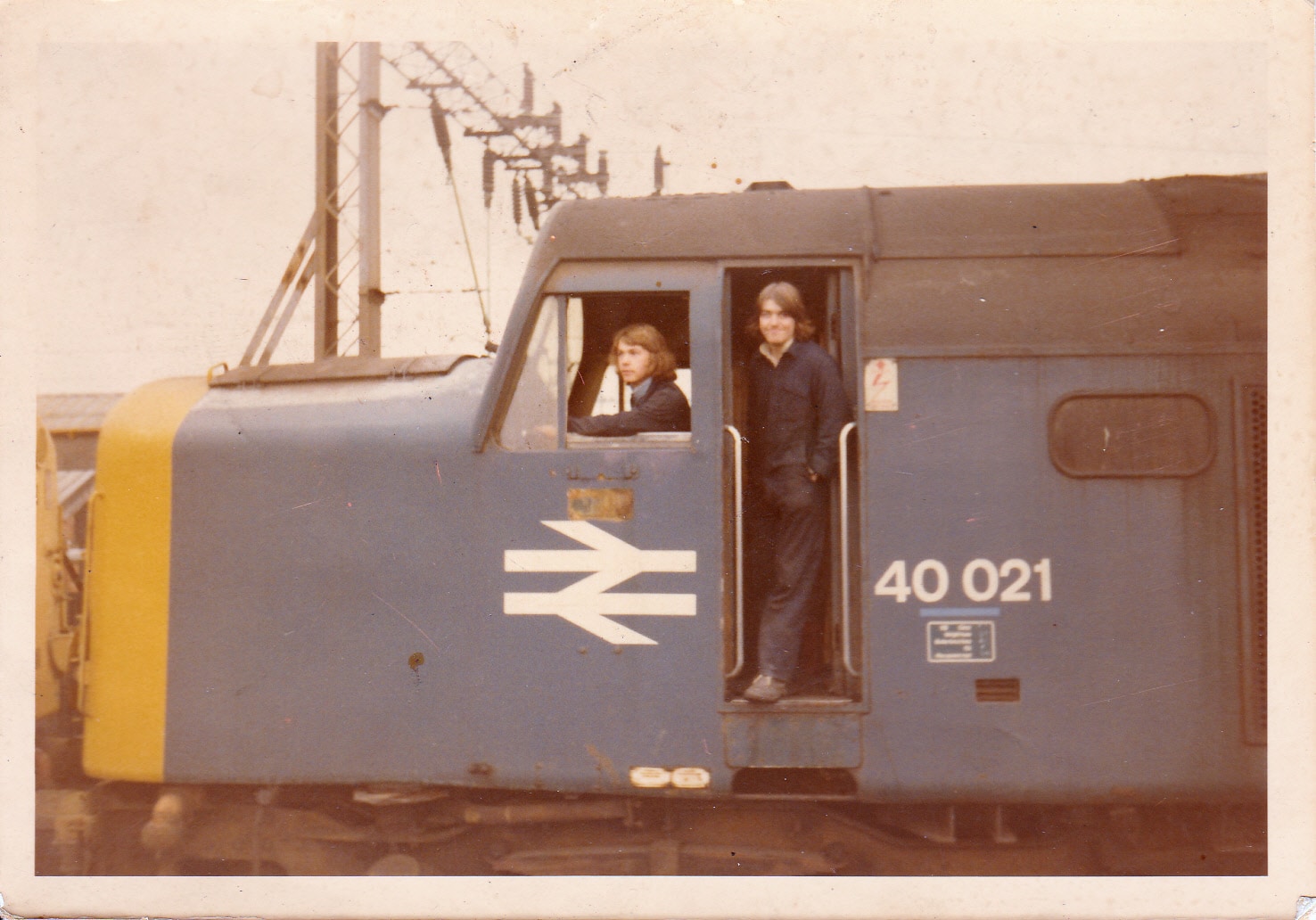 My exam results came out and on the same day I submitted applications to Doncaster and Swindon works. Doncaster rejected my application on the basis that I was too far out of their catchment area. I found this surprising as I lived on the East Coast Main Line. Swindon works wrote back apologising but they had already filled their two allocated places. They also pointed out that applications had been submitted earlier in the year and conditional offers had been made on the basis of exam results. However they forwarded my application to Crewe Works. A short time after, I received an invitation for an interview at the General Offices in Crewe along with a free ticket to travel there by train.

On Monday the 16th September 1974, I left our house just as Eve by Jim Capaldi was playing on the radio. Travelling into King’s Cross, I walked down the Euston Road to Euston station. I caught the 10:00am to Bangor and just over two hours later set foot on Crewe Station. I was in good time for my interview but  I decided to go and find out where the General Offices (GO) were. I walked towards the town centre, crossing over the Chester line before I came to another railway bridge. The building adjoining this bridge were the GO for Crewe Works.

I discovered later that the original Chester line once went past the works offices but was diverted away to the current location when the works were expanded. The original route was used as an access point for locomotives to and from the works. The GO were built on a on a curve that mirrored that of the old line. For many years, newly built locomotives from the works were positioned on the line for formal photographs to be taken. Some even featured the GO as a backdrop. It is sad that this magnificent building and indeed the line are no more.

After a brief lunch, I reported to the GO just before the appointed time. Shortly after I was taken along the corridor and shown into an office where I was introduced to Dave Looker and Geoff Ollier. These two gentlemen were to interview me. It was explained that although the recruitment for engineering apprentices had been undertaken early in the year, offers had been conditional on successful applicants achieving the required exam results. Unfortunately one of the applicants had failed and this resulted in the vacancy that I was being interviewed for. I can’t remember how long the interview lasted but at the end I was asked if I would kindly step outside while they deliberated.

The wait seemed ages but then my adrenalin must have been running on overload. Eventually Geoff Ollier open the door and I was invited back in and asked sit down. Dave Looker said that they were delighted to be able to offer me the position and apologized for keeping me waiting. The delay was because they had been arranging lodging arrangements for me. The engineering apprentice training had already commenced so I would have to start the following Monday.

They asked if I needed any monetary assistance as an interest free loan to pay for my lodgings. Due to my temporary job at Harper Engines, I had amassed sufficient funds. I was told that during the first year of training, I would attend day release plus three night classes at Dane Bank College. This was initially to study for an ONC in engineering before going on to HNC and endorsements. I was given a staff pass that would that would give me free travel between Stevenage and Crewe. I was also given a free pass for my bicycle. 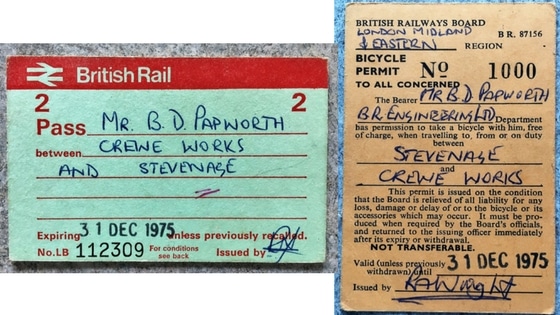 The observant of you will notice that the staff pass is made up between Stevenage and Crewe Works. It is not well known that Crewe works had its own station. It was located on a spur that went into the electric traction depot adjacent to the Chester line. There used to be a service to and from Stoke on Trent that was extended from Crewe station to the Works station. This service was purely for rail employees at the Works and presumably those at the electric traction depot, the Paper and Printing offices and the E200 Stores that were located in the same area. I used to use the service on occasions particularly during frosty or snowy weather when cycling was more hazardous. 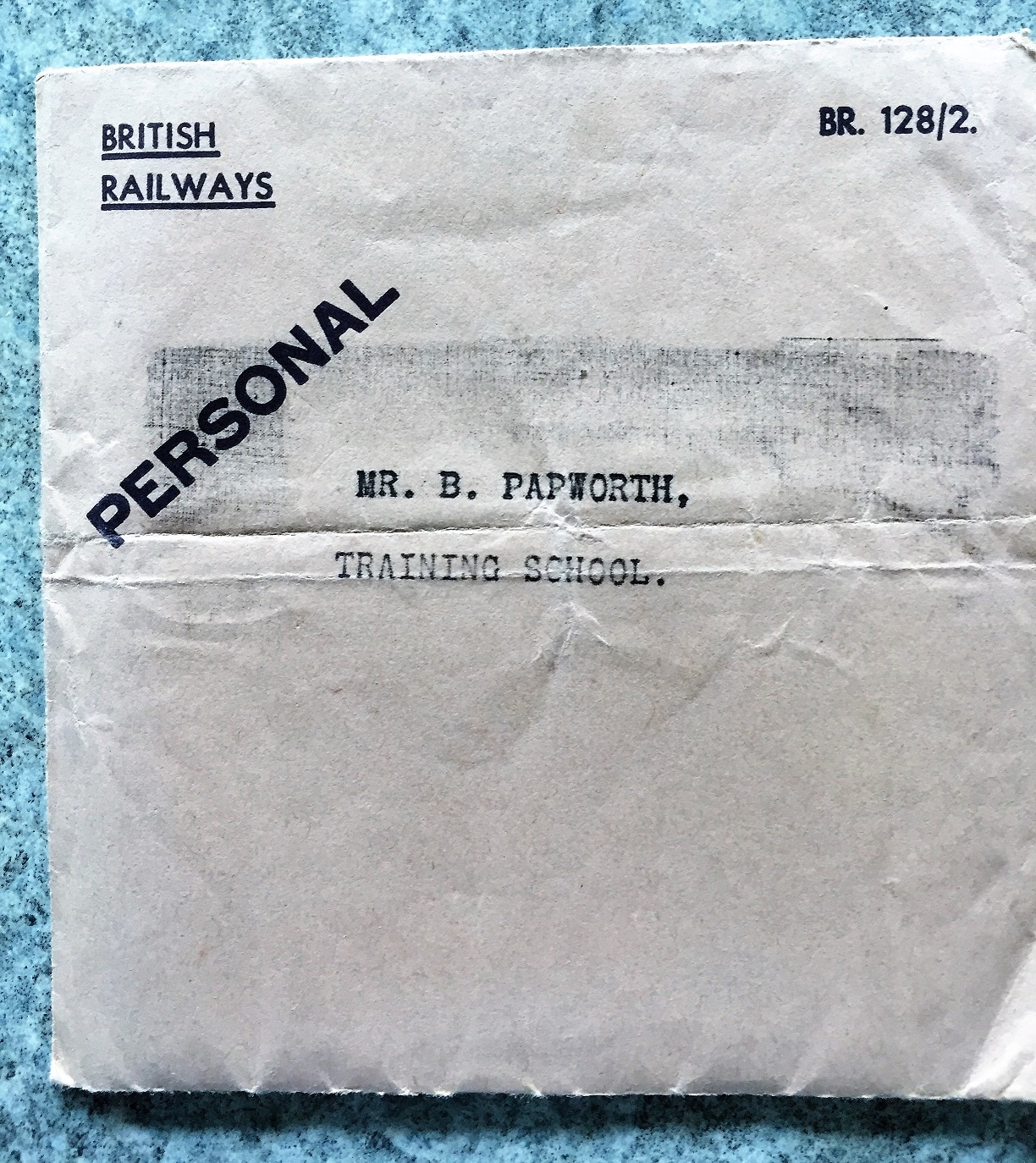 On my arrival back at home I tried the old ploy of looking sad and dejected but my parents were having none of it. They both said ‘when do you start?’! Unable to contain my eagerness any longer I said ‘In a week’s time!’. My family and I were thrilled but at just sixteen and a half years of age, some would find it a daunting prospect to live and work during the week a long distance from home. I would have to travel out on a Saturday and return on a Friday evening. My enthusiasm for the position though would see me through. On the 23rd September 1974 I started work on British Railways. And so the adventure began…

Read more about my first year of training at Crewe here