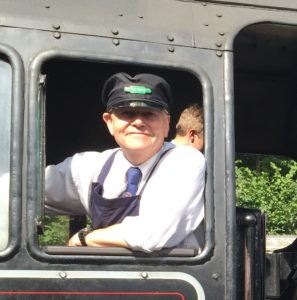 If you love Heritage Railway, Model trains or even Modern Railway,  you’ll feel right at home here. With a career on British Railways spanning over 40 years and as a lifelong train enthusiast, I’m going to share with you some of my personal thoughts and interests be they on heritage lines or the main railway.

For many years I have been involved in Heritage Railways.

I trained as a guard on the Tallylyn Railway, Wales in the 1970’s.

I was passed out for firing steam locomotives on the Great Central, Loughborough in the mid-1980’s.

For 17 years, I helped restore a BR Class 9F locomotive 92212 back to working order from scrapyard condition.

I have always had an interest in the Somerset & Dorset Joint Railway based at Midsomer Norton near Bath. For a number of years have been helping to restore services to a section of this line for all to enjoy travelling on this iconic and sadly missed railway. Currently, I’m the Chief Mechanical Engineer.

Over 40 years of railway experience

I was employed on the British Railways for over 40 years.

In 1974 I joined BR Engineering at Crewe locomotive works. After 4 years of training along with college study, I graduated as a professional engineer.

In my career, I’ve worked as an engineer improving locomotive performance.

I’ve worked as Depot Manager at a number of locations on British Rail including Eastleigh.

In latter BR days, I was Fleet Manager for Midland Mainline before getting involved in rail privatisation and franchising.

I’m in the process of building my own 00 gauge model railway and you can find out more about it here.

See the Books and DVDs I think are worth buying on Amazon.

If you are considering working with me, please find out more here.