Just to explain – this blog post is about working on the P-Way in the 1970s but I didn’t have any photos from this time so I’ve put in photos of the track re-laying at Midsomer Norton to show the kind of work we did back then.

When I worked as a salaried staff engineering apprentice at Crewe Works, I was not allowed to do overtime in the Works itself. Clerical staff, junior managers and other staff were very limited on overtime as well. However, there was an opportunity to earn some extra money on the railway. This was by spending weekends labouring on the track referred to in railway parlance as the Permanent Way or P-Way. There were overtime opportunities on a Saturday night or Sunday day shift.

The Permanent Way Depot near Crewe station sent the jobs to one of the chief clerks in the offices at BREL House. The gentleman was called Peter but I cannot remember his surname. Hopefully someone reading this will recall his full name? I do remember he had a beard. When Peter was on annual leave, the jobs would come in to another clerical officer called Steve Sambrook. Both Peter and Steve would go on the P-Way jobs themselves. They would co-ordinate volunteers who wanted the available jobs. Scrap loading jobs were the most popular as these were usually done on a Sunday day shift and avoided working nights. As a result, newbies like me usually ended up with Saturday night re-laying jobs. Although it was harder work, I used to enjoy the different types of jobs. I was getting paid to do a labouring job but I still found it interesting. The P-Way staff had high levels of teamwork which I enjoyed. This was and still is a common trait amongst the vast majority of railway personnel but P-Way stuff demonstrated it particularly well.

Working on the P-Way at Buxton

I had a brutal introduction to working on the P-Way. One of the hardest jobs to which I was allocated was in Buxton. Now as many of you will know if the country is to get a whiff of snow, Buxton will get it first.

As we left Crewe late evening, the Winter night was clear but as we neared Buxton the snow had fallen and settled. We arrived in a snow blizzard at a point near the station yard and directed to a light coming from a window some yards away. Disembarking, we almost blindly made our way to the light which was coming from a brick building. As we entered, a shout went up ‘Put wood in hole quickly will ya!’ It was like walking into a sauna. A great roaring coal fire was heating the place wonderfully. Quite possibly the person who prepared this furnace had been a fireman on steam locomotives as these had only finished on the railway about 6 years earlier.

We settled down and were offered cups of tea in heavily stained mugs. This was always the way in those days and no-one worried. A couple of our guys were saying how cold they were particularly their legs. At this, a large muscular clearly experienced P-Way engineer remarked ‘You should do what I do and borrow me wife’s tights’! No-one dared say anything derogatory to this remark with several nodding sagely saying what a good idea. I was tempted to ask if I could borrow his wife’s tights next time but decided to keep quiet!

The weather prediction was that snow would cease falling by around 22:00 so the gaffer was sure we could start work shortly. I was involved with lifting and packing along the freight line near Buxton station. This was the old Midland Main Line route through the Peak District to London St Pancras. Keeping moving and packing ballast under the edges of sleepers kept us warm. I survived the night and the hospitality of the regular P-Way guys was great.

Some weeks later, another night job meant re-laying the junction South of Stockport station. The area was where that the Crewe line diverged from the route to Stoke-on-Trent. Work had begun on the day turn of Saturday and by the time we arrived late evening, the old point work had been removed. The ballast had also been completely removed. The P-Way guys refer to this operation as a ‘deep dig’. Next, a white membrane was placed along the ground and new ballast laid on top. When the sleepers were placed down, I was tasked with helping to bar it into position using a long crowbar. This alignment work went on for hours and was particularly exhausting when barring the large and heavy point timbers into position.

The crew took meal and tea breaks in a large BR yellow liveried Leyland FG bus that had transported us to site. I wonder whether anyone has preserved one of these? It was hard work and the involvement of a junction made it complicated. As daylight came, the day shift began to appear and not long afterwards the job was handed over to them. There was a sting in the tail though. The following weekend we were back there again. I did say this was a complicated job and unfortunately the complexity contributed it to an issue which meant large parts of the newly laid track had to be redone.

Over the years, many have criticized the railway for leaving track materials on the line side. Back in the 1970s, BR organized frequent teams to recover scrap items. Such jobs are called ‘loading scrap’. Scrap primarily consisted off-cuts of rail, broken rail chairs, pandrol clips another track fasteners, fixing screws as well as sleepers. Scrap was loaded into rail wagons that would be moved along once an area had been cleared.

One such job I went to was around Norton Bridge on the West Coast Main Line. Now I can’t remember whether it’s because we were doing such an excellent job clearing the area but the gaffer allowed an extended lunch break. Some of the guys said they were off to the Royal Oak at Eccleshall. In those days, the railway did not have an alcohol policy. The rule book stated very clearly though that drunkenness was a sackable offense. However moderate drinking was tolerated. At that time, 1966 World Cup football hero, Sir Geoff Hurst owned the Royal Oak. Thus the trip was popular and a number of us went in the crew bus to sample the delights. We didn’t see Sir Geoff but the one pint of beer we had was fine – no-one abused the situation. 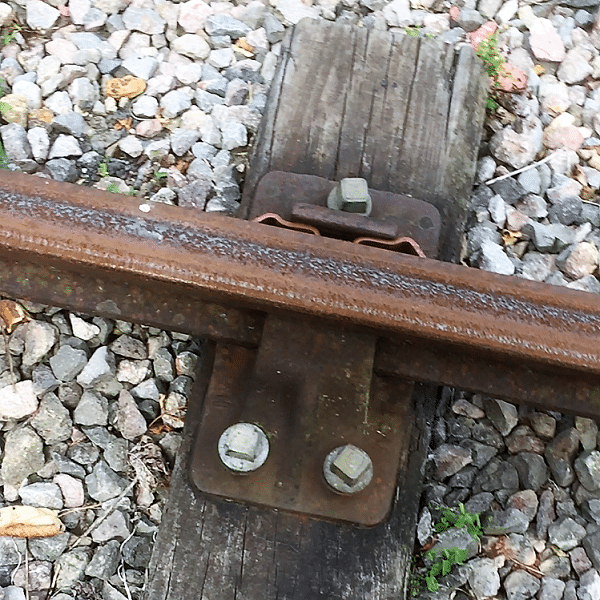 Exiting the Western end of Woodhead Tunnel heading towards Crowden

By far the most memorable P-Way job I was part of though West Crowden on the DC electrified Woodhead route. The weather was fine when we arrived. The work was to replace a quarter of mile of the East-bound line. There were no train services as it was a Sunday and we were working with complete engineering possession. To assist, on-train plant was positioned on the Westbound line. The ballast train containing new ballast was located just beyond us on the line we were on. Once the old track and sleepers had been removed, we craned the new sleepers off the wagons. It was our job under instruction from the gaffer to correctly space under line them.

Once the sections of rails were clipped in place, the gaffer eyed up the alignment. We would then have to follow his instruction to slide the track into position with large crowbars. It required the combined strength of the whole team acting at the same moment. We finished the re-laying job early and I recall the gaffer saying we were eight men short and he was well pleased with our efforts.

P-Way gaffers are highly respected railway men with extensive knowledge of the best way to lay the permanent way. They used to be recognisable by their long trench coats and flat caps. The gaffers orders were carried out like a military operation. For those of you who haven’t encountered such fine gentleman, a superb video by Cine Rail briefly shows a P-Way gaffer of this type. In Volume two of the Railways of Scotland the Waverley Route, is a short feature of track re-laying just north of Hawick. The breakdown crane from Hawick is positioning track panels. It is easy to spot the gaffer in his long trench coat and flat cap striding over the sleepers checking the alignment with his sharp eyes. Capturing one of these guys in action on film is magnificent and brings back very happy memories of my time working on the P-Way at weekends.

Eventually the opportunity to work as laborers on the P-Way with BR ceased. I am glad to have had the experience. Nearly 40 years later, I worked on the P-Way again on the Somerset and Dorset Railway at Midsomer Norton. We are re-laying part of the route that closed in 1966. The team here are all unpaid volunteers. However the P-Way gang team work and banter I remember still exists. We are working on the track with the wonderful views across the valley. It’s very satisfying to be putting back a railway line. Recently, the S&D held two ‘track bash’ weekends where the regular gang were joined by professional engineers from Mott MacDonald. Without exception all enjoyed the experience and wanted to repeat it. At Midsomer Norton, Trevor Hodge is the gaffer. We are still trying to convince Trevor to wear a long trench coat and flat cap!

Did you work on the P-Way in your railway career? I’d love to hear your memories so please leave me a comment below.