Ever thought about using converted railway carriages to make a restaurant in your back garden? How about adding a platform and a station? Find out how Michael Attle has done just that!

But first, let me tell you how I became aware of this amazing place: We are currently restoring a British Railways Mark 1 Brake Second Corridor (BSK) carriage M34527 at the Somerset and Dorset Joint Railway at Midsomer Norton as I have mentioned in a previous blog post. Recently a friend of mine, Andrew Harvey, made me aware that some carriage parts were for sale near Cambridge. British Railways completely stripped the interior of M34527 in the 1970’s when it was converted for departmental use as tool van in Tinsley Depot’s breakdown train. Although we had acquired the compartment partitions we were still missing compartment doors. Luckily, the railway parts for sale near Cambridge included the doors that we needed. We made arrangements to collect them and hired a van. On arrival, Michael Attle, Managing Director of Bannold Supplies and Services at Fen Drayton near Cambridge was there to meet Andrew and I.

The idea behind this railway carriage restaurant I had done some preliminary research on the coaches at Bannolds. However, we were not expecting the superb setting we saw from the moment we arrived at the end of the station drive. A family run company, Bannolds supplies natural hard landscaping materials. The photos of the station driveway clearly shows the quality of their products.

Michael explained that while in India he visited a restaurant located in a colonial railway station and enjoyed the experience. Back in the UK he obtained some platform edging stones. These had come from a disused part of Oakham station. This sparked the idea of building a station in one corner of Bannolds yard. He decided to buy three British Railways carriages and position them on tracks either side of a small island platform. The carriages would form a unique and exciting Pullman style restaurant for afternoon tea called ‘Carriages of Cambridge‘. 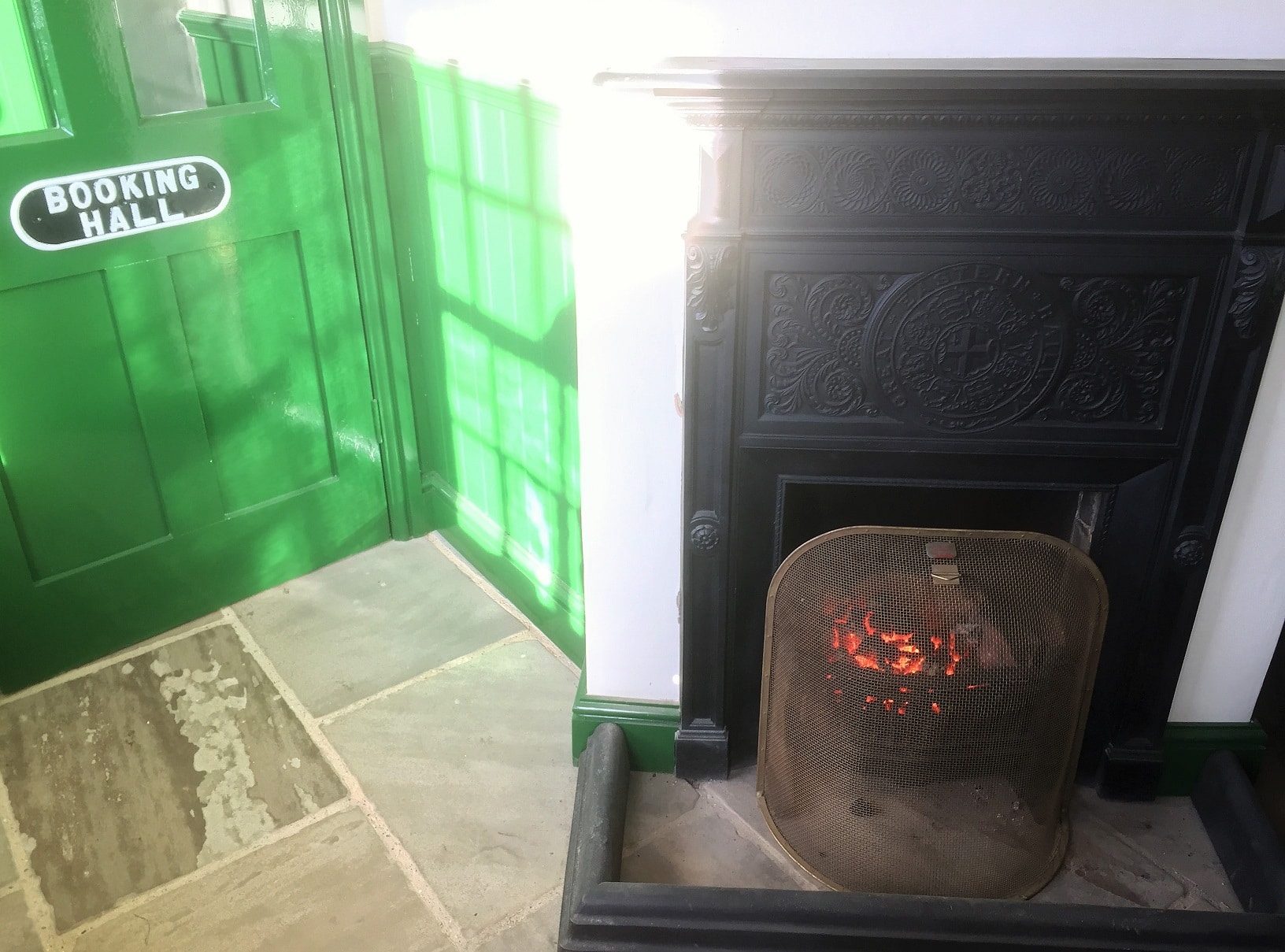 A cosy warming fire in the Booking Office

The next step was to build a ‘station’ housing a booking hall and ticket office. Guests could then enjoy the building and platform ambience before boarding the vintage carriages. The attention to detail is truly amazing and gives off a wonderful feeling of nostalgia. So what is the history of these three coaches at ‘Carriages’?

In October 2009, Mark 1 Second Corridor (SK) 24458  became the first carriage delivered to the site.  This vehicle was built at Swindon Works in 1954. It was built with 8 compartments with 2 bench seats opposite each other. Each bench seat had room for 3 people giving a total capacity of 48 seats. There were arm rests at the end of each seat with two more towards the centre which could be ‘grudgingly’ raised by passengers to create room for a fourth person at a squash! Very cosy! Indeed the SK’s built for the Western and Southern Regions of BR were built without armrests so the seating capacity was in theory raised to 64.

There were 2 toilets at one end of the coach. As the primary traction on BR at the time the carriages were built was steam locomotives, the heating system was also powered by steam.

The carriage was allocated to the Eastern Region of British Railways for the majority of its service on the national network. It was withdrawn from BR stock in 1982 and the following year was purchased by the Mid Hants Railway. After many years in service on this heritage railway, it was then moved to the South Devon Railway. By the Summer of 2002, it was at the Battlefield Line until eventually it was transferred to the Bluebell Railway in June 2007. Unfortunately leaks in the roof ultimately damaged the interior. This didn’t deter Michael from buying the SK as he intended to remove the compartments and make it open plan. It was fortuitous that some of the compartment doors removed from this SK were available to us for our BSK. It also meant they are being reused. 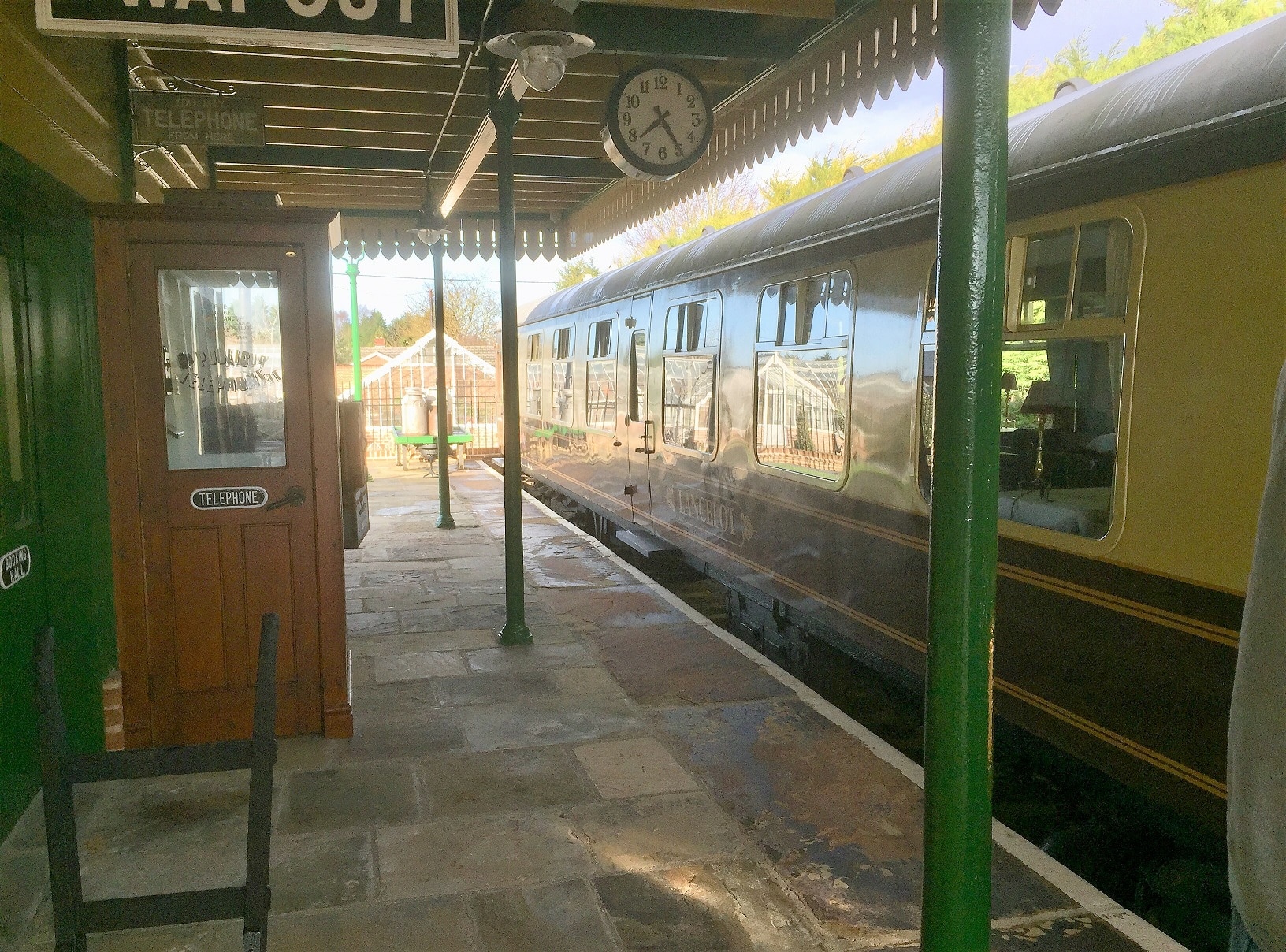 As can be seen in the picture above, it looks absolutely splendid. 24458 may originally have carried BR carmine and cream livery, possibly maroon and latterly corporate blue and grey. Today, it sports Pullman style umber brown and cream and is named Lancelot.

The next vehicle Michael bought was Composite Corridor (CK) 15626. This carriage was built at Wolverton Works in 1957. It was originally fitted with 7 compartments each with 2 bench seats opposite and room for 3 people on each seat giving a totally capacity of 42 seats. 4 compartments were classified First Class accommodation and the remainder Second Class.

A toilet was provided at both ends of the carriage. The carriages were steam heated. When diesel locomotives were introduced, they were fitted with steam generator boilers to provide a supply for the heaters. When steam was phased out, BR began to add electric heating to many vehicles including 15626.

From new, it was allocated to the London Midland Region of British Railways. However in early 1982 it was transferred to the Eastern Region and ran for around 5 years until withdrawn in the Autumn of 1985. It was bought for the Llangollen railway and was used on this heritage line until bought by Michael and moved to Fen Drayton in March 2010. 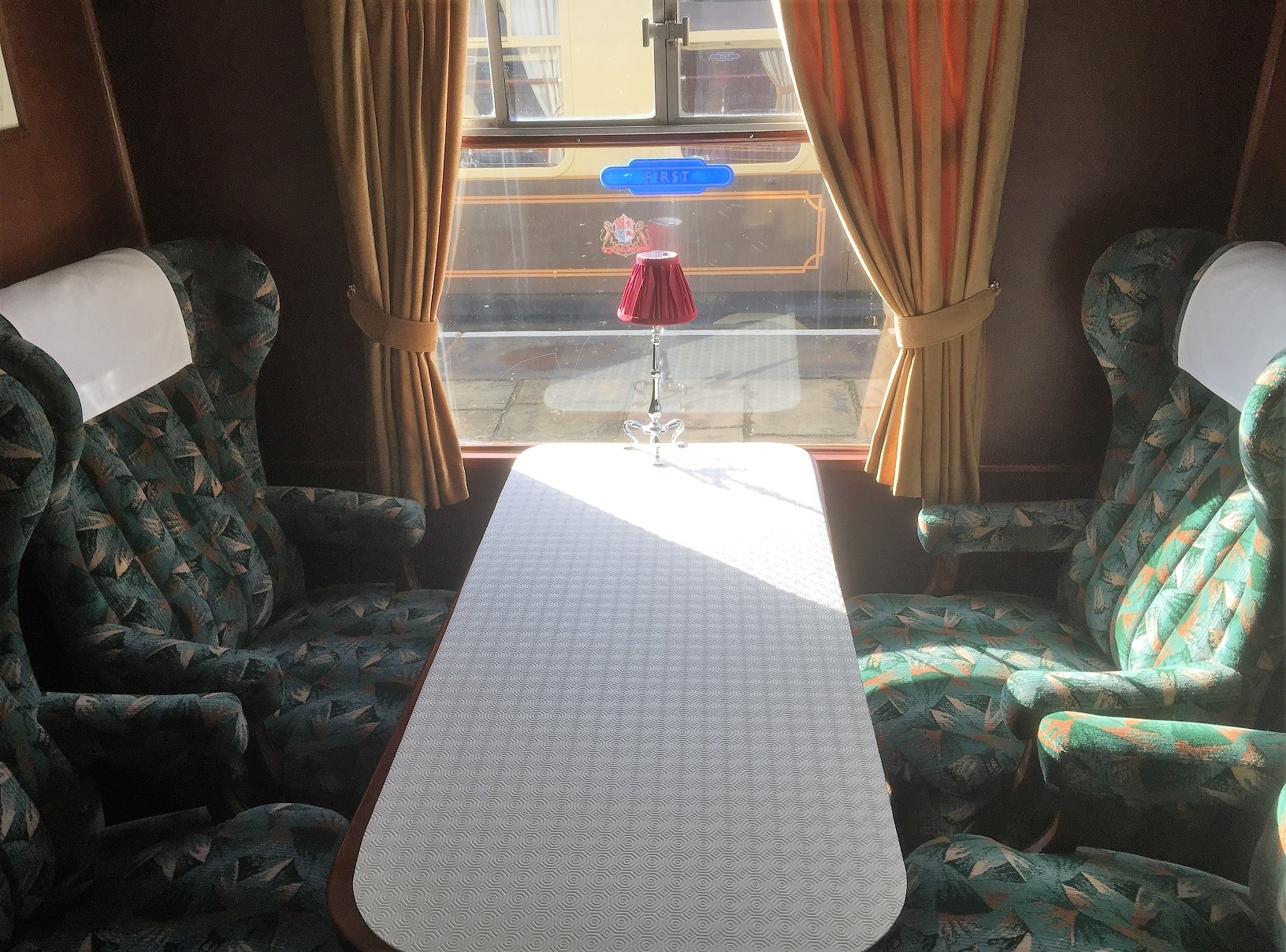 Although it retains its compartments, the bench seats have been replaced with re-upholstered loose chairs. When first built, this carriage would have been painted in BR maroon and later in corporate blue and grey. Now it sports Pullman style umber brown and cream and is named Oliver.

The final vehicle of the trio is First Open (FO) 3065. It was built at Doncaster Works in 1955. It was built with 42 seats arranged with pairs of seats on one side of the corridor and a single on the other. Apart from offering First Class passengers a wider seat, it also aided with dinner service. Indeed BR built Second Class dining carriages (including Second Opens – SO’s) with the same seating arrangement for this reason.  A toilet was provided at either end of the carriage. Also of note are the offset gangways at either end. These helped to reduced drafts primarily when the window of external doors had been left open!

This carriage also had a steam heating system then was converted to electric train heating in 1967 along with many Southern Region vehicles. Steam locomotives ceased to be operated on SR in July 1967.

By 1966, it was used exclusively in the Ocean Liner Express on the Southern Region of British Railways. Trains operated to and from Southampton Terminal for passengers sailing on the Queen Mary and the Queen Elizabeth liners. These exclusive trains operated until the late 1970’s.

The carriages were then only allocated (diagrammed, in train planning speak) for special charter work. During this time the coaches undertook what was probably their saddest duty. They formed part of the Royal Train carrying the body of the late Earl Mountbatten of Burma from Waterloo to Romsey on the 5th September 1979.

In 1982,  the carriages were set aside for possible use in connection with the visit of His Holiness Pope John Paul II to England although in the event it was not used. Subsequently the coaches were stored at Basingstoke to await disposal.

FO S3065 in the ‘Watercress Belle’ on the Mid Hants Railway during the 1980’s. Photo by Clive Warneford

Fortunately three of the FO coaches including S3065 were purchased by the Mid Hants Railway and arrived in October 1982 for use in the Watercress Belle dining train. My friend Clive Warneford owned S3065 from 1983 until 1998. With the heritage railway operating primarily steam locomotives it was retro-fitted with steam heating equipment.

In May 1988, S3065, together with the other two FO’s had a brief return to the main line . They were used in a Network South East (NSE) charter celebrating the Woking 150 celebrations. On the 10th September, they were used in another NSE charter operating two return trips between Waterloo and Arelsford in connection with the naming of Class 73 electro-diesel locomotive 73005 ‘Mid Hants Watercress Line’. Incidentally this loco, now re-numbered 73966 and owend by GB Railfreight,  is still on the main line being overhauled as recently as 2015 for use on the Fort William Caledonian sleeper.

FO S3065 then named ‘Orchid’back on the mainline in 1988 after an absence of around 6 years. Photo by Clive Warneford

FO S3065 returned to the Mid Hants line and operated the Watercress Belle for another 10 years. During this time, it was painted into a simplified Pullman style livery and was named ‘Orchid’ by the owner Clive Warneford as these plants grow wild along the Mid Hants Railway. FO S3065 as the ‘Orchid Restaurant’ at The Hound Inn near Whitehaven in Cumbria. Photo by Clive Warneford.

It was sold in 1998 and moved to Carnforth shed. Some time later it was sold again to ‘The Hound Inn’ in Arlecdon near Whitehaven in Cumbria and used as a restaurant. Although initially retaining its Pullman style  livery when in use as a restaurant it was subsequently painted into Southern Region green. This is evidenced by the photographs above of its arrival at Bannolds in August 2013. S3065 may originally have carried BR carmine and cream livery, possibly maroon and latterly corporate blue and grey. Today though it again carries Pullman style umber brown and cream and is named Louis in honour of Earl Mountbatten of Burma. 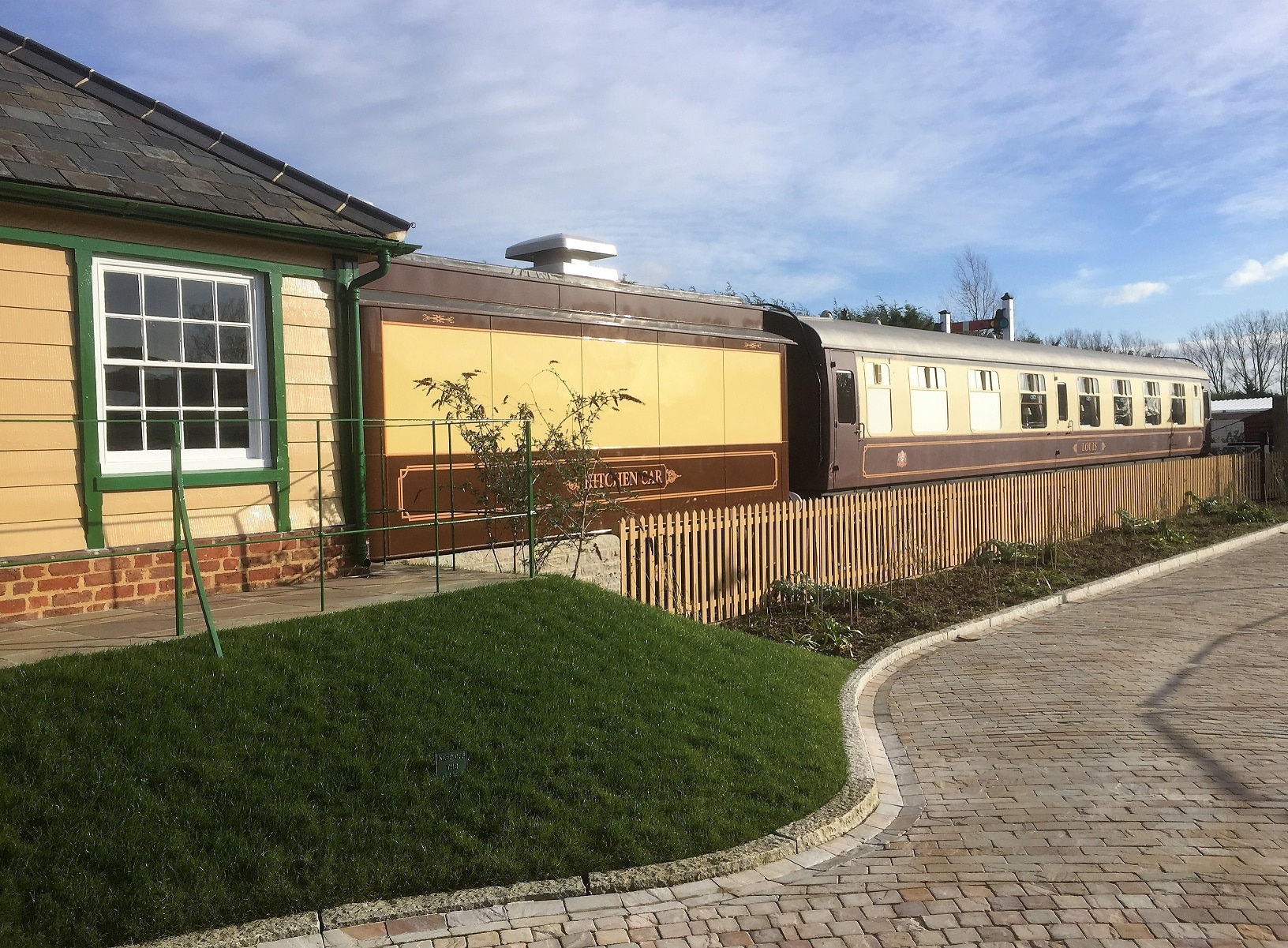 Michael has had the seating re-upholstered in Pullman moquette. Some time after this he was he was presented with two loose chairs that are in the same moquette. These have been positioned adjacent to the bar area. View of the Signal Box as seen from FO S3065 Louis

So now you have know something of the history of these three coaches, why don’t you book yourself with family/friends in for afternoon tea at Carriages or maybe hire them for a special event. The website for Carriages of Cambridge is here.

There are a number of other railway related special features that Michael demonstrated to us that I don’t want to reveal and spoil the surprise for visitors. You’ll have to go and experience this fantastic railway carriage restaurant for yourself! 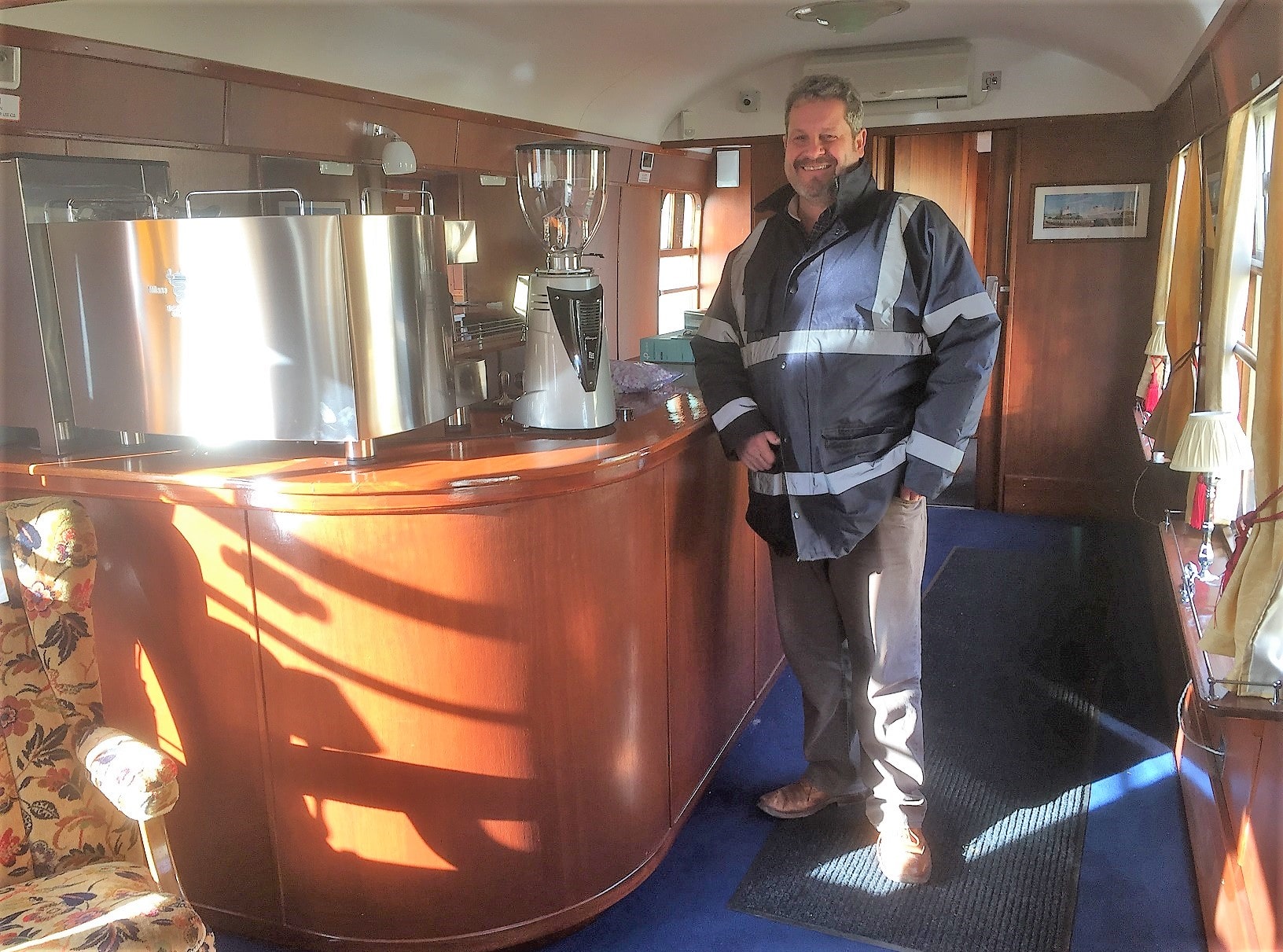 I would like to extend a big thank you to Michael Attle for his hospitality and taking the time to show us around Carriages and for my friends Andrew Harvey who went with me and shared the driving and to Clive Warneford former owner of S3065 who provided much of the history of his former coach.

Read more about the restoration of a Mark 1 railway carriage at Midsomer Norton here.

Restoring Class 08 Shunter Locomotives at the NNR
Original Railway Posters Exhibition
Exclusive access to Eastleigh Works
The Remarkable Survival of Steam Locomotive 80150
Magnificent Memories of Sidmouth Railway Station
Baby Deltic history and rebirth
Let's thank Beeching for our steam railways today
Railway memory lives on with anniversary walk
Behind the scenes at Herston Works
Testing Diesel Locomotives at Crewe Works
How did you get interested in railways?
Let me introduce you to my model railway