The railwayblogger is delighted to bring you a guest post by Nick Thompson a director and volunteer of Southern Locomotives Limited.  Nick grew up in the 1950s and 60s in Woking and his dad worked on the railway as the fire protection officer for this part of the system and steam locomotives were always the bane of his life. He’d laugh if he knew how Nick spends his time…  Over to Nick:

Southern Locomotives Limited is a not-for-profit company based in Swanage. It is run by a small team of skilled staff and a willing band of volunteers. To help keep engineering skills alive they have recently taken on an apprentice. They own seven locomotives;  I am primarily involved with express steam locomotive 34010 named Sidmouth which we are currently restoring it to working order. Back in the 1940’s the Southern Railway built a fleet of express steam locomotives designed by Oliver Bullied the Chief Mechanical Engineer, to haul trains from Waterloo to Devon and Dorset.  Many of these “West Country” class of locomotives carried the names of towns the railway served.  The tenth locomotive built was named “Sidmouth”, and numbered 34010.  It travelled to the Sidmouth station for a naming ceremony on 27th June 1946.

34010 Sidmouth was first based at Exmouth Junction loco shed, now the site of Morrisons supermarket in Exeter. It hauled express services in the south-west of England until withdrawn from service in 1965.

The loco was then sent to Barry scrap yard in South Wales.  At the scrap yard, it was much easier to get the steel out of coal trucks than locomotives. Steam locomotives are made of  many different metals, not to mention asbestos, so there were about 300 steam locomotives left in the sidings.   This meant that Sidmouth was lucky and escaped the cutter’s torch until it was bought for preservation in 1982.  After several changes of ownership it was bought by Southern Locomotives Ltd which has restored several similar locos. Work started on Sidmouth early in 2016. However buying 91 tons of rusting steel is the easy part. Restoring it to working condition takes a lot of time and money. The frames, wheels, boiler and most other components exist in various states of disrepair. The rest can be sourced or made from new.  The project will take around four years and cost well into six figures.  The team have a complete set of drawings that were done in 1945 at Eastleigh Works. Having restored similar locomotives they understand the task and can go ahead with confidence. Sidmouth will be restored to mainline engineering standards, however we will not fit the electronic signalling equipment needed to run on Network Rail.  It is expected to work initially at  Swanage Railway.

The restoration team have had to be resourceful to get all the parts that are needed. They needed two sets of new steel tyres for the driving wheels and the only place in the world those tyres are made is in South Africa. These were fitted at the South Devon Railway workshop in Buckfastleigh, one of the few places in the country able to do such heavy engineering. One man recently got in touch about parts that he’s kept as ornaments. It turned out they are just what was needed for Sidmouth! It was unbelievable that they should show up after more than 50 years. Elsewhere we got in touch with a man who was thinking of using a Bulleid chimney as a flowerpot!

To help with fundraising we appealed to our 700 shareholders and we had a very good response from them. There has also been new supporters from those living in Sidmouth, Devon itself.  I have given several talks in the town which have generated lots of interest. Many local people are supportive, even those who would not generally class themselves as train fans because of the local connection.

The project will cost around £500,000 and take at least three years to complete; so far we have raised around £70,000.  Everybody who contributes to the restoration will be invited to renaming ceremony and first passenger trips. Those who become shareholders will have an opportunity to drive and fire the loco. 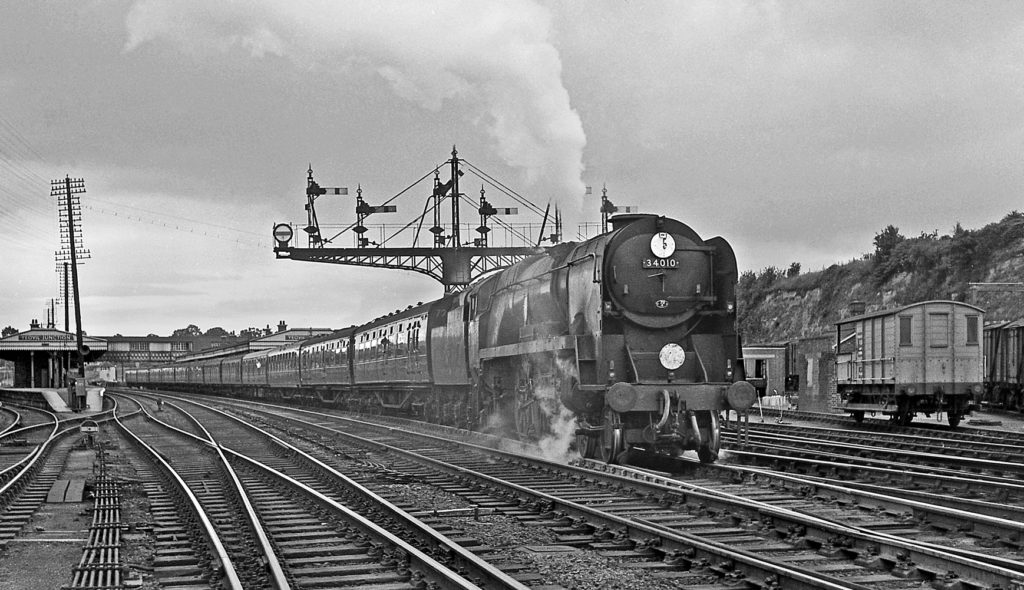 A superb view of 34010 Sidmouth leaving Yeovil Junction with an up express on 22nd July 1962. Photo: John Whiteley

This project will be one of the final restorations of a loco from scrap yard condition.  Big green locos with shiny brass nameplates attract people of all ages and the loco will be a fine ambassador for Sidmouth and bring East Devon to the attention of people from all across the country.